PHNOM PENH, Cambodia – Kloeung Aun says when he returned to Cambodia after a 27-year absence in June 2002 he arrived “with nothing – one set of clothes, whatever money I had in my account, no luggage, nothing.” Having left at age seven as a refugee, Aun has no family in Cambodia. The 34-year-old from Texas was forced to leave them behind in the United States as one of the first Cambodian-American returned under an agreement enforcing a 1996 U.S. law that mandates deportation for aliens convicted of a felony. 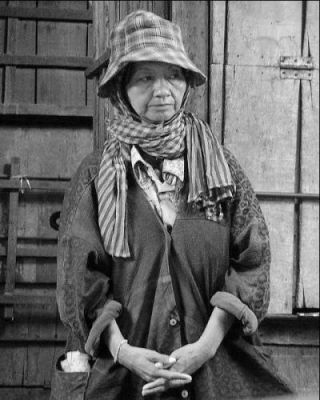 HOME ALONE: 1,400 Cambodian-Americans are subject to deportation under a new agreement reached in March 2002. Many may find themselves living on the street like this woman.

“The deportation came as a shock. If I had known about my deportation I could have prepared my family, saved money. But they did not prepare me. As a refugee I had more belongings going to America than when I returned to Cambodia.”

When Aun arrived with the first group of six deportees in June 2002, immigration officials had no idea what to do with the group. The six were detained for varying amounts of time and then released to make their way in what was essentially a foreign country to them.

Aun feels it has been easier for him to adjust than other returnees because he retains memories of Cambodia, even if they are of working in rice fields as a child under the Khmer Rouge.

Bill Herod, founder of the Returnee Assistance Project (RAP) in Phnom Penh, says the deportees are often unable to navigate their new homeland. “The INS does not prepare detainees for the country of destination. Basic information, like not drinking tap water, the exchange rate or current political climate, is a mystery to most returnees.”

Aun eventually received help from RAP, which helped him find a job at a restaurant where his English was an asset. RAP offered Aun and the others orientation to the new culture, housing and employment assistance, lessons in Khmer literacy, psychological and substance abuse counseling, medical assistance, communication to families left behind, and most important, a safe place for returnees to ease the stress of being severed from family and familiarity. Now Aun is a RAP program officer, soon to be assisting other returnees.

The 1996 immigration law mandating deportations was never enforced on Cambodian-Americans because the two countries lacked an extradition agreement. The Bush administration reportedly threatened to deny visas to Cambodians entering the United States and impede World Bank and IMF assistance unless a deal was reached. An agreement was finalized in March 2002. The trickle of 67 deportees who have been sent back since then will become a flood over the next decade as 1,400 other Cambodian-Americans are expected to be deported. The 1996 law works retroactively, so even those who complete prison terms decades ago are still subject to deportation.

Aun says, “I feel dumped by the U.S. government but I cannot blame them because I put myself in the situation. But I wish they had given our community a chance. As refugees they could have told us of our rights or lack of rights. One conviction of a felony and boom – you’re out.”

Herod is frustrated with the law as well: “I really react to the suggestion that these returnees are criminals. These are individuals who have had some incident of criminal activity somewhere in their background. Some got into trouble in their late teens and now they are being penalized for life for a single mistake they made at 17 or 18.”

For many Americans, returning immigrants to their home countries may seem like a reasonable response to crimes committed by those who do not have full citizenship status. But Nil Samorn, Director of Social Services at RAP, says Cambodian deportees have exceptional circumstances.

Samorn explains that many immigrants from other countries entered the United States illegally as adults to work, and have families in their countries of origin and familiarity with the culture they rejoin when deported. Cambodians, on the other hand, “were political refugees who became legal residents, invited to the U.S. when very young. They have their families, wives, children, childhood friends, not to mention childhood backgrounds, in the States.”

Hawaii, a returnee nicknamed after his home state, embodies this situation: “Having an American wife and three kids, growing up in the States and knowing nothing else… I thought I was a citizen, period. My grandmother told me that after living in the country for seven years and marrying an American one automatically has citizenship. I never knew I had to fill out papers and all that. I had to tell my wife to go on with her life because she would never see me again.”

In addition to the shock of being torn from their families and the culture they know, returnees have had to contend with discrimination in Cambodia. Some employers are skeptical of giving returnees work, and there are families who are afraid to allow them to court their daughters. RAP tries to intercede with potential employers by explaining that the returnees have completed their sentence in the States and were functioning in society before being deported.

RAP has also taken on the role of advocate for returnees who suffer from mental health problems such as manic depression. Herod recounts a story of one such returnee whose family had chained him to a chair because he was out of control. No one was aware of his condition until a RAP representative contacted a mental health professional for an assessment. The returnee quickly stabilized after receiving treatment.

Herod recently rented a new residential facility on the outskirts of Phnom Penh. “It’s a nice family home with three bedrooms for $300 a month. It will give us the option of putting 15 or more in a dormitory style facility. “We see it as a mental health facility. There is space for recreation, a garden and raising chickens, and we will probably have some occupational classes in carpentry, etc. It’s a safe place they can go if sponsorship breaks down, if they lose their job, or if they come in from the provinces for a while.”

Such a haven is a welcome source of support for those who are having trouble making the transition. Hawaii, for example, returned to the RAP center after a failed attempt to live with his father – a man he met for the first time after being deported.

Hawaii’s fear of the future is palpable. He spends a lot of time at RAP because he does not know what else to do. “After having been here seven months I would like to start my life here, get a job. I try not to think about the States or my kids. I just try to make it day by day.”

On the other end of the spectrum, many returnees have transitioned effectively into their new lives with help from RAP. One has become very successful working for an oil company in Northern Cambodia, another is now a web designer and several have been temporarily hired by local radio stations as DJs. About 20, including Aun, have married. Aun goes so far as to say, “I miss where I grew up but prefer living here now.”

RAP lacks the funding and staff to ensure that every transition is so successful. Herod says, “We try to launch each returnee as soon as possible since we know that there will be more coming.” RAP does not receive financial support from the U.S. or Cambodian government, and is asking for volunteers for personal counseling as well as drug counseling and rehabilitation. Herod says that despite these obstacles, “The policy at RAP is ‘leave no one behind’. These people are not losers and it’s our job to make sure every returnee has a chance at building a new life.”

Bill Herod can be contacted at bill@rapcambodia.org or by mail at: KIDS Guesthouse, 17A, Street 178, Phnom Penh, Cambodia. For more information go to www.rapcambodia.org