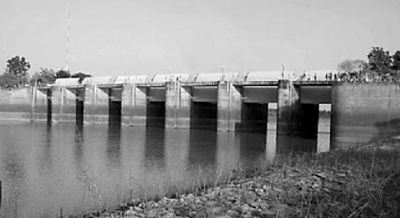 THE RASI SALAI DAM in Thailand. The dam’s gates have been open since 2000 when villagers won a long struggle for restoration of the area and their livelihoods.

They came into our village with large trucks to take the elderly people and children. We said we wanted to know where we are going, what kind of soils we will have, what will happen to our livestock, our property, our graves. Some said, ‘No, we will not go. So they sent the soldiers and killed some of our people because they did not want to move from the river. Then we all moved – all except our ancestors who are still buried under the water.”

This is how Chief Syankusule of the Tonka, speaking at a 1999 conference of dam-affected people of South Africa, described the forced removal of his people in 1957 to make way for the Kariba Dam. Fifty-seven thousand Tonka were resettled in this matter.

Almost 50 years later, little has changed. Large hydropower projects have become a lynchpin of neoliberal “Third World Development” strategies, and are usually built under the guise of bringing electricity to rural communities and water to their farmlands. All too often the dams direct water and energy to wealthy agribusinesses while allowing governments to make sweetheart arrangements with favored corporations.

“They tend to be bad deals,” says Lori Pottinger of the Berkeley, California-based International Rivers Network (IRN). “There are tremendous social, environmental and economic ramifications. The poorest poor tend to be the big losers.” Big dams displace communities, devastate aquatic life, and destroy cultural and archeological sites. They preempt consideration of other forms of sustainable energy, like geothermal and solar power. However, international financial institutions like the World Bank continue to promote large hydropower projects as a development elixir.

In 2002, a coalition of Ugandan grassroots organizations won a court case against President Lt. Gen. Yoweri Museveni to release information regarding the financing of the proposed Bujagali dam, ten kilometers from the source of the Nile. The secret terms of the contract called for Uganda to pay the U.S.-based energy giant AES, the builder of the dam, $100 million annually for 30 years, regardless of how much electricity was produced. AES dropped out of the project amid scandal and the World Bank is seeking a new partner.

The IRN has supported Ugandan activists by spearheading a letter-writing campaign targeting World Bank President James Wolfensohn. The World Bank has failed to respond – even to letters signed by representatives of 120 different organizations. In addition to strangling the Ugandan economy, the dam would displace 500 villagers, directly affect the livelihood of 6,800, submerge ancient shrines, and wipe out the burgeoning $60 million-a-year tourism industry at the Bujagali Falls. Only 7 percent of Ugandans would be able to afford the unsubsidized electricity provided by the dam, according to the World Bank’s own estimates.

Local Ugandan organizations advocate following the lead of Kenya in developing geothermal and solar energy, but such alternatives are generally ignored by the World Bank and the Museveni government. In neighboring Sudan the situation is still more dire. The proposed Merowi (or Hamadab) Dam project, headed up by Lahmeyer International of Germany and Alstrom of France, threatens to displace more than 50,000 Sudanese villagers. The dam, to be located at what was the cradle of Kush civilization more than 5,000 years ago, would change the course of the Nile and submerge archaeological landmarks.

“Archaeologists from around the world are now rushing to the dam site to try to salvage what they can before the water starts rising,” says Ali Askouri of the Office of Hamadab Affected People.

The government of Sudan, a military dictatorship embroiled in civil war, has brutally cracked down on opposition to the dam. In one peaceful protest at Korgheli Village, police dispersed men, women and children with tear gas and live bullets. Organizers were arrested, detained and tortured for carrying out campaigns to educate villagers about potential effects of the dam.

According to Askouri, “The government policy on this project is a complete blackout and strict censorship on any news about the local resistance.” Meanwhile the government perpetrates an illusion of cheerful acquiescence by the Hamadab people. When 200 families were forced to resettle in the Nubian Desert, Sudanese television showed government agents posing as affected people agreeing to move peacefully and receiving money as compensation. The reality is that eking out an existence in completely barren lands could mean the extinction of the Hamadab.

There’s still hope for the people in Uganda and Sudan. Dam-affected people around the world are forming links and sharing strategies. They’ve also joined forces with northern NGOs like International Rivers Network, which can be important partners in lobbying banks and corporations to withdraw their support from dams.

The First International Meeting of People Affected by Dams, held in Brazil in 1997, drew representatives from 17 countries. The same year, the World Bank, responding to global pressures, collaborated with the World Conservation Union in creating a World Commission on Dams to develop an internationally acceptable criteria for the construction of hydropower projects. The commission’s final report in September 2000 rejected many of these large dams.

The Second International Meeting of People Affected by Dams at the village of Rasi Salai, Thailand, in December 2003 brought 300 participants from 62 countries. “The melding of people from all over the world was really extraordinary,” says conference organizer Aviva Imhoff. “The regional networking was incredible.” Among other upshots, 30 representatives from different African countries agreed to establish an African Network on Dams – a critical step, says Imhoff, as “Africa is the industry’s next big target.”

Participants at the Rasi Salai meeting united under the slogan “Water for life, not for death!” The brutality described by Chief Syankusule is hardly a relic of the past; a Sudanese official reportedly told dam-affected people that anyone opposing the project would be “roasted.” For the people of Sudan, Uganda and other nations that are being recolonized, this time by economic imperialism, the fight against big dams is nothing less than a matter of life or death.