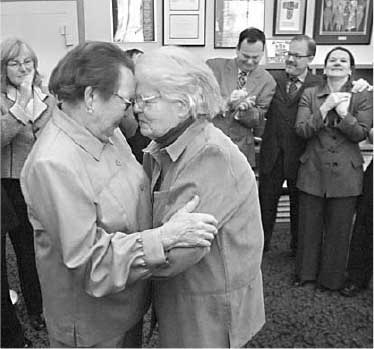 Neil Conrad Spicehandler of Massapequa died at St. Vincent’s Hospital in February 2002, three days after being admitted with a broken leg he suffered in a hit-and-run accident in Midtown. John Langan, Spicehandler’s partner, sued the hospital for wrongful death. The hospital filed a motion to dismiss, stating that Langan lacked the legal standing to sue as he was in a same-sex civil union not recognized in New York. Lawyers and activists are hopeful that a court ruling in the case will set a precedent, not only for New York State but the entire country.

Lambda Legal Defense & Education Fund has taken up Langan’s case and is arguing that New York must respect a contractual union entered into in another state. Lambda Legal has already won one victory in Nassau County Supreme Court. In April 2003, Justice John P. Dunne ruled that the Vermont civil union between Langan and Spicehandler created a marriage contracted in another state, and that New York State policy did not preclude respecting the union in a wrongful death suit.

Adam Aronson, staff attorney for Lambda Legal, described Dunne as “a conservative, elected Republican judge in a suburban area. If there was anyone who might have been inclined to be biased against us, it was a judge like this.”

Yet, Aronson added, the judge saw the eminent rationality of the viewpoint that they were advancing.

After an appeal filed by St. Vincent’s, the case now sits with the New York State Supreme Court, Appellate Division, Second Department. They will not be deciding whether there was wrongful death in the case, but simply whether the wrongful death case should be heard at all.

In late January, Lambda Legal was joined in their fight by four groups: the Association of the Bar of the City of New York, New York County Lawyers’ Association, Women’s Bar Association of State of New York, and the American Academy of Matrimonial Lawyers, New York Chapter. These groups submitted an amicus curiae brief in support of the decision. The brief argued that New York has a long history of what is called “comity.” Comity is the recognition of an agreement contracted in another jurisdiction, though the jurisdiction in question has no obligation to do so. Common law marriage is a very common application of comity. The Court has yet to decide whether or not it will accept the brief. With same-sex unions being recognized by more and more states and municipalities, cases like this could become more and more common throughout the country.

“Most of the civil unions in Vermont have been by out-of-staters,” said Jay Weiser, lead council on the amicus brief and associate professor of law at Baruch College’s Zicklin School of Business. “Now we’ll have marriage in Massachusetts. Within North America, people are highly mobile, so courts across the country will have to wrestle with this issue.” “Courts have essentially wrestled with the broader issue of comity for the entire time that New York has existed,” said Aronson. He believes that the Court’s ultimate decision should be based on precedent.

“New York law, as it currently stands, has consistently recognized the marriages and spousal unions that have been entered into in both sister states and foreign countries,” Aronson said. He added that the courts have rejected only two such marriages in the last 200 years. Those involved either polygamy or incest. Because of New York’s status as a hub of immigration, its reputation for attracting people from other states and the high regard for its court system, it is considered a leader in the issue of comity.

Other states are looking to New York for leadership in this area. This court’s decision could open or close doors in other areas of the country, but it probably won’t open the door for civil unions in New York.

Because this case is viewed as an issue of comity and not one of same-sex civil unions, “it’s a separate issue,” Weiser said. “Comity is historically an area of judge-made law. It’s part of the common law. Civil union would likely be a decision of the legislature.” The Court could wait until the summer to issue a decision. The losing side will most likely take the case to the New York Court of Appeals, New York’s highest court.