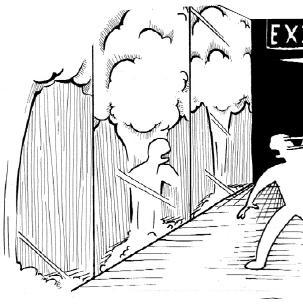 The media’s refusal to face the Iraq situation head on has dropped the public into a WMD hall of mirrors, where the Bush administration’s blunt, terrifying language of a year ago has been replaced by Orwellian obfuscation. What’s worse, many in the press seem unable to get out of the objectivity trap they’ve constructed for themselves.

Journalists often cite the demands of “objectivity” to excuse lazy and even dishonest reporting. As longtime reporter Brent Cunnigham noted in a issue of the Columbia Journalism Review, “If you’re on deadline and all you have is ‘both sides of the story,’ that’s often good enough… [The media] needs to free (and encourage) reporters to develop expertise and to use it to sort through competing claims, identify and explain the underlying assumptions of those claims, and make judgments about what readers and viewers need to know to understand what is happening.”

In other words: a bogus WMD claim is still bogus, no matter how it’s spun; a lie is a lie.

Whether the media can shake old habits remains to be seen. Taking cues from the leaders of powerful institutions is an entrenched habit with many journalists. And advocates of truth in journalism only need to look across the Atlantic to the BBC to see the dangerous consequences that too much independence of mind can bring.

At the height of the futile search for Iraqi weapons of mass destruction, BBC reporter Andrew Gilligan noted that a pre-war dossier about Iraq’s weapons capacities was probably “sexed-up” to help bolster the Blair government’s case for war. Despite the general and undeniable truth of the BBC’s claim, an investigation by Lord Hutton found that the BBC had betrayed the public trust by not following standard operating procedure and double-checking its source. The entire situation led to a surreal clash of headlines in Great Britain with simultaneous columns noting the outcome of the Hutton inquiry alongside David Kay’s admissions to Congress that “we were almost all wrong” about Iraq’s WMDs.

Typical of some reporters’ attitudes is a quote from the doyenne of double-talk, the New York Times’ Judith Miller. From September 2002 to April 2003, Miller broke a number of “exclusives” about Iraq’s purported WMDs, all of which were later shown to be false. Responding to allegations in the New York Review of Books that she was too easily seduced by bald faced Bush administration lies, Miller argues: “My job isn’t to assess the government’s information and be an independent intelligence analyst myself. My job is to tell readers of The New York Times what the government thought about Iraq’s arsenal.”

While there’s time for the press to overcome its aversion to the truth, it needs a lot more reporters like the BBC’s Andrew Gilligan and a lot fewer like Judith Miller. As of press time, however, Gilligan is the journalist without a job. According to many reports, a climate of fear has descended on the British press and the BBC in particular, with few reporters willing to challenge the Blair government directly. Miller, on the other hand, remains safely ensconced with the Times, eagerly awaiting, no doubt, her next opportunity to take the administration at its word.