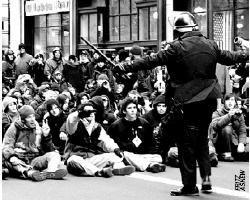 How is United for Peace and Justice looking at the present and the future?

LC: This last year has been incredibly important. Here in New York City last year we estimate there were at least 500,000 people over near the U.N. on Feb. 15, and of course millions of people all around the world marched against the war that weekend. But many people ask, where did the movement go, why haven’t there been such massive street demonstrations since then?

It doesn’t mean people have gone away. Of course, some people were frustrated, disgusted, discouraged that they couldn’t stop the war. But, I think for the most part, people realized that we are up against tremendous obstacles, and of course, no matter how important the big street mobilizations are, that can’t be the only thing we do. We have to be doing the base building, the educational work.

Some of that energy of the last six months or so has gone into electoral campaigns. But I think we are about to see a reemergence of the street protests.

You think we are seeing a reemergence, perhaps. Do you think it might have a greater impact on the situation? Do you think Bush is really “on the run” now?

LC: Well, I think he is definitely vulnerable. I think what happened last year in terms of the anti-war movement, and with the burst of energy surrounding anti-war activism was in part tapping into a lot of other issues. The Iraq war was the straw that broke the camel’s back in way. People said, enough!

How are the discussions going in terms of the March 20 march?

LC: We’re not going to march past the U.N. This year we want to stay right in the heart of Manhattan, where people are. We’re convinced that there is a tremendous dissatisfaction with the president’s policy in Iraq. But not all of that sentiment has been translated into an actual mobilization of people. So we want to take our forces out into the heart of Manhattan to try to encourage and revitalize an even larger segment of the community to join us.

To listen to the full interview, go to http://nyc.indymedia.org