The current turmoil in Haiti appears to be a classic example of popular forces battling an autocratic regime. But there is more to the conflict than meets the eye. The Guardian, for one, reported on Feb. 16 that a former Haitian death squad leader and 20 commandoes slipped over the border with the Dominican Republic on Feb. 14 to do battle. Other unsavory figures joining in include Guy Philippe, an ex-police chief who fled Haiti after attempting a coup against current President Jean-Bertrand Aristide in 2002.

Armed groups have been battling the police and Aristide supporters for weeks. The opposition is a mix of civic groups, rightwing political parties and elements from the brutal Duvalier regimes that terrorized Haiti for decades.

Aristide, a former Catholic priest, rode a wave of popular support to win the presidency in 1990. Previously, Haiti had been run as the gruesome fiefdom of the Duvalier family from 1957 to 1986. A military coup deposed Aristide in 1991 and death squads decimated popular forces, killing some 4,000 people until Aristide was reinstated in October 1994. When he reassumed power, Aristide disbanded the military, which had received U.S. aid for decades.

Now, former members of the notorious death squad, the Front for the Advancement and Progress of Haiti (FRAPH), are reportedly training along the Dominican border. Also, opposition forces have met with officials from the U.S.-funded International Republican Institute (IRI) in Santo Domingo.

“The Dominican military is working with Haitian forces and are making forays into Haiti. The U.S. destabilizes Haiti through other forces,” commented Jill Ives of the magazine Haiti Progress.

Multiple parties constitute the Democratic Convergence, the mouthpiece of the opposition to Aristide. “In 1991 they were Aristide allies, and then Aristide separated himself from them,” said Esery Mondesir, a Haitian political activist now living in New York.

Democratic Convergence denies it is linked with forces fighting in the north, but it refuses to hold talks with Aristide about the violence until he agrees to leaves power.

Aristide supporters discount the Democratic Convergence’s following among Haitians. Its support appears to come mainly from the business community. “The opposition is a case study in low-intensity warfare with media repetition, armed incursions, and disinformation,” says Kim Ives of Haiti

Group 184 is a civic group that mobilizes business people, intellectuals and non-governmental organizations around “a social contract and a possible consensus to end the political gridlock and attempt to reconcile a torn nation.” The group is led by apparel manufacturer Andre Apaid, whose father opposed Aristide in 1991, and began mobilizing around the 2000 elections, in which politicians allied with Aristide stepped down amid opposition cries of fraud.

“Many groups started as neighborhood defense committees and were politically conscious,” says Kim Ives, who adds that some of these groups later degenerated into “drugs and extortion.”

Ex-FRAPH soldiers comprise most of the armed opposition, while remnants of the defense committees form the “gangs” allied with Aristide. Some groups such as the Cannibal Army, once aligned with Aristide, now fight him because ex-Cannibal Army leader and drug dealer Amiot Metayer was arrested by Aristide in 2003.

ARISTIDE AND HIS BACKERS

President Aristide’s base is Haiti’s poor, who make up more than 80 percent of the population and elected him president in 1990 and 2000. The Organization of American States (OAS) found irregularities in the senatorial elections of 2000, but discounted opposition assertions of widespread fraud. Aristide repeatedly asked the opposition to participate in elections last year, but they have refused to talk with the government until Aristide steps down. Some observers say that’s because the opposition would lose any election.

Parts of the opposition receive funds from the IRI, USAID and the Haitian-American Chamber of Commerce. The Bush administration has also blocked aid to the cashstrapped Aristide government and hints that it favors ousting him from power. In the wake of the 2000 elections Washington tried to expel Haiti from the OAS, which declined to do so. Caricom, a group of 15 Caribbean nations, is trying to bring the opposition and Aristide to the bargaining table. 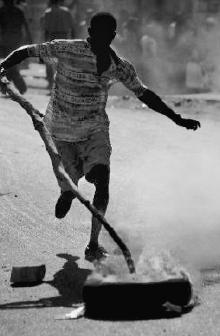