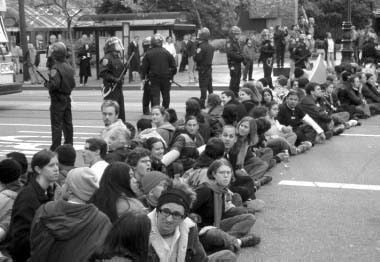 Direct action groups, building on the experiences of the WTO protests in Seattle in 1999 and last year’s antiwar actions in the San Francisco Bay Area, are gearing up to let Republicans know they are not welcome to celebrate their agenda in NYC this summer.

But the upcoming Republican National Convention is not about the Republicans, say Mayor Bloomberg and Ed Koch, whom Bloomberg picked recently to be the public face of the convention. It’s about celebrating New York, they insist.

Try telling that to the hundreds of direct action protesters – not to mention the hundreds of thousands of more conventional activists – who plan to flood the city starting Aug. 30.

“That’s a bunch of bullshit,” says Jamie Moran, a member of the New York City-based direct action group rncnotwelcome.org. Moran and other direct action protesters have been working for over a year to make it abundantly clear that the convention is about the Republicans and their agenda.

“If you really want to make a difference, you have to be out in the street, being vocal, putting your body on the line,” says Eric Laursen, a member of the New York City based M27 Coalition, a direct action group.

While those involved in direct action aren’t saying much about specific plans for when President Bush, Tom Delay and Rick Santorum are in midtown; you don’t have to be a rocket scientist to realize they aren’t going to go away easily.

If past actions are any indication, New Yorkers can expect to see people sitting down in the middle of the street, blocking corporate entrances or bridges or making the lives of visiting Republican delegates a living hell.  As opposed to traditional protest marches or rallies, where organizers obtain permits and coordinate with police, direct action has its roots in anarchy and the idea of bringing about change by instigating it yourself.

“You’re actually putting your foot in the door, saying we won’t allow you to do this,” Laursen explains. “For example, actually stopping the World Trade Organization meetings in Seattle a few years ago.”

David Solnit, a member of the San Francisco-based Direct Action to Stop the War, which plans to brings hundreds of people east to protest the convention, says it’s “one of the most important demonstrations ever. The entire planet is desperate to get George Bush out of office.” The week of the convention, Solnit says, will be “a mass confrontation between the American people and their government.”

New York’s finest, of course, have a quick answer to that kind of thinking. “Arrest ‘em. It’s simple,” says Paul Browne, the NYPD’s deputy commissioner for public information. “They’re not going to be able to do that in New York.”

Browne says that the department is prepared with specially trained “arrest teams” to “isolate people who are breaking the law to allow the rest of the demonstration to continue.”

While the legacy of Seattle lingers, direct actions in San Francisco and Oakland, California last year might give a better indication of what to expect this summer.

In response to the Iraq war, parts of San Francisco were shut down last March when several groups of activists simultaneously sat down in the street. Traffic snarled citywide and thousands of people could not get to work; over two thousand people were arrested. A few weeks later in Oakland, police shot rubber and wooden bullets at peaceful direct action protesters and bystanders trying to block the entrances to two shipping companies with ties to the war in Iraq. Dozens were injured, and class action lawsuits have been filed. Both cases received national media coverage and left direct action activists emboldened. New York, they say, is next.

Moran stresses that coordinating information for visiting protest groups is a major function of rncnotwelcome.org. But like many New Yorkers he doesn’t like the idea of President Bush’s agenda being celebrated here.  One way of getting that across, Moran says, is to “birddog” delegates – where activists follow delegates throughout the city. Or as Moran puts it, “making the stay for the delegate as uncomfortable as possible.” To this end, rncnotwelcome.org has posted hotel addresses on its website where delegates will stay.

The NYPD’s Browne says it’s hard to comment on “birddogging” without a specific example. But he says the department’s size – 36,000 uniformed officers – and resources are up to the challenge. “We do training all the time. We’ve seen what happened in other cities where police were not prepared.”

Yet things could get complicated for the department if protesters not associated with direct action groups decided to follow their lead. That’s what happened in San Francisco last year, according to Solnit. “A bunch of us organized some things, but it was really 20,000 Bay Area residents who said [the war in Iraq] was not okay.”

Perhaps more than anything, direct action protesters simply want their concerns heard, and they’re not willing to take the normal route of using marches on Fifth Avenue to air their views. Direct action is an old tactic, they point out, spanning events such as the Boston Tea Party, Gandhi’s 1930 salt march in India and the US civil rights struggle.

“I would like people to know that there is a movement out there rising up against the current establishment,” says Jim Macdonald, an activist with the Washington D.C.-based DC Antiwar Network, who plans to be in New York for the convention.

Macdonald says it’s important for the direct action movement to conduct itself in ways that are not contradictory to the message. Attacking a police officer is not their message. But “if you’re blocking a bridge or causing some economic damage as Martin Luther King did, I don’t see anything wrong with that.”

Antiwar Protesters block a San Francisco street on the day after the war in Iraq started.
New Yorkers could see similar direct actions at the RNC.
Photo: Indybay.Org