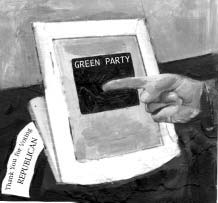 States around the nation are moving to replace voting election equipment with Direct Recording Electronic (DRE) machines in time for the upcoming presidential elections. But with only six months until November, there remain serious concerns over the reliability of the machines and mistrust of the companies that manufacture them. With an estimated 30 percent of the voters nationwide slated to vote electronically in this election, opponents of the technology argue that the new machines are less reliable than the paper ballots they will replace.

In 2002, Congress passed the Help America Vote Act (HAVA), which mandates that all states upgrade their voting machines and election procedures in time for the 2004 election. How those upgrades get implemented, however, is left up to individual states, which are interpreting the law differently.

The strongest indication yet of the growing lack of confidence in DREs came in April when California State Secretary Kevin Shelley decertified 15,000 touchscreen electronic voting machines in four counties due to security concerns. The machines were all made by Diebold, the second largest manufacturer of electronic voting machines. Diebold came under intense scrutiny following the malfunction of their machines during the California state primaries in March, which observers say may have altered election results. Diebold’s controversial CEO, Walden O’Dell, has made six figure donations to the Republican Party, and in a 2003 fundraising letter pledged that he was “committed to helping Ohio deliver its electoral votes to the president next year.”

Diebold and other large-scale producers of DREs like Sequoia and ES&S have refused to allow independent inspection of the software running their machines, citing proprietary security concerns. But critics strongly object, arguing that the lack of oversight makes it easier to tamper with votes.

“This action happened not because of security problems, per se, but because of the way Diebold handled the systems once they were in the field, putting unauthorized patches in, misleading people about what they were doing … I think there are going to be ramifications for a lot of states,” said Avi Ruben, a professor at Johns Hopkins University and voting machine expert in a recent interview with Democracy Now!

California’s decision to reject Diebold’s machines comes at a time when states around the country are investing millions in similar technology.  Like California, however, other states have had trouble with Diebold’s DREs.

In Georgia’s 2002 gubernatorial race, Democratic incumbent Roy Barnes led his Republican challenger Sonny Purdue by nine to eleven percentage points in polls taken on the eve of the vote. When the results from Diebold voting machines came in, Purdue had defeated Barnes by 51 to 46 per cent, a swing of up to 16 points. Wired magazine reported that a former Diebold warehouse worker said the company installed last minute patches on its machines just before the election without notifying Georgia election officials. While there is no evidence that anything illegal occurred, throughout the day there were numerous reports of Diebold’s equipment malfunctioning.

Last July, a group of independent researchers from Johns Hopkins conducted a detailed study of the software used in Diebold’s DREs. The report said there were “stunning flaws” in the source code, which they say contained numerous loopholes that could be exploited to alter a voter’s ballot choices.  Diebold issued a stern rebuke, but similar findings were made by a group of computer experts commissioned by the state of Maryland a short while later.

Federal lawmakers are also working through initiatives aimed at preventing the kind of catastrophe that marred the 2000 presidential elections.

As part of this effort, on May 5, the Election Assistance Commission convened its first meeting, which was mandated by HAVA. Meeting in a packed hearing room before a bipartisan Congressional committee, experts gave sharply contrasting views on DRE technology.

There was strong support for creating paper trails, also known as verified voting, that would allow voters to double check their ballots after casting a vote by touchscreen. Proponents argue that this would provide a more reliable vote count as well as instill confidence in voters who might be unhappy about not seeing any verification of their electronic ballot.

“The paper trail is needed even though it’s a big headache for election officials who have to go back to paper again,” says Robert Stearns, a former New Mexico poll worker and an organizer for Verified Voting.  “Without it there’s no possibility of a recount in a close election.”

A current bill proposed by Rep.Rush Holt (D-NJ) seeks to amend HAVA by requiring “all voting mechanisms to produce a voter-verified paper trail that can be used in the event of a recount or post-election audit.” While the federal amendment is still languishing in committee, states like Nevada and Missouri are moving toward making voter verification a requirement in time for this year’s election.

As for the millions of registered voters here in New York there is less immediate reason for worry. With the exception of two small counties upstate, all New Yorkers will use the old lever machines in November.

John Tarleton contributed to this report.