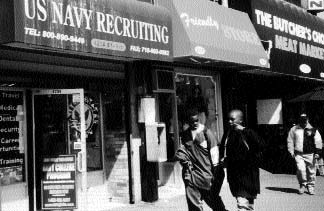 René Ramirez stands squinting into the sun on the corner of Fordham Road and Grand Concourse, braids glistening in the midday light as Ben Ramos of ProLibertad Youth/ Student Network declares into a megaphone, “We will not be the poor people killing other poor people across the world for rich people… we are making the Grand Concourse and Fordham Road a liberated zone.”

“I’m just thinking about that guy who got arrested for not going back to Iraq,” says Ramirez, 20, referring to Sgt. Camilo Mejía, the first active duty U.S. soldier to go AWOL from the war. “If he doesn’t want to be over there killing people, he shouldn’t have to.”

For Ramirez, as for many of the Bronx residents who joined a May 1 picket of the United States Armed Forces Recruiting Station, Mejía’s predicament hits close to home. In a borough with a chronically high unemployment rate, the military advertises itself as the only option for Bronx youth to get ahead. Many Bronx young people are recruited through their high schools or at one of the recruiting stations scattered across the borough.

Few have a clear understanding of what they are signing up for. While the military promises college funding and job training, two-thirds of all recruits never receive any funding for college. According to the Central Committee for Conscientious Objectors, a survey funded by the military itself found that “only 12 percent of male veterans and 6 percent of female veterans surveyed made any use of skills learned in the military in their civilian jobs.” Further, at least 50,000 unemployed veterans are currently on the waiting list for the military’s “retraining” program, according to the Army Times.

Tanya Romero, a college advisor at El Puente Academy of Peace and Justice in Brooklyn, sits cross-legged on the concrete, making a sign. It reads, “No More Military Recruitment We Want College Recruitment.”

“I find that [students of color] are really informed about military options – but when it comes to college and higher education, they don’t know anything. When I ask if they envision themselves going to college, more than 50 percent have never considered that option,” says Romero.

Romero tries to counter the influence of military recruiters by teaching a unit on military myths in her college prep class.  “I show them how historically the poor and people of color have been targeted. When they see the statistics, most of them realize they’ve been cheated and lied to.”

Ramirez, who dropped out of school after sixth grade and later earned his GED, is among many Bronx youth who have considered the military option. “I was about to go into the army, but I decided I got to get my education. Knowledge is power,” he quips with a sideways smile.

“Most youth in the Bronx feel that what’s going on in Iraq is wrong,” says Jaime Rivera, who sports a Puerto Rican independence T-shirt, “but part of our socio-economic reality is that we have three options – work a 9 to 5 job for minimum wage, hustle in the streets, or join the military. That’s reality but we’ve got to educate the youth as to what the military is really all about.”

Some young people are turned off by recruiters’ blatant attempts to exploit the socio-economic background.

“They showed up at my house and said I’m from the projects so I’m not going to make it,” says 17-year-old senior Jasmine Uribe of the South Bronx. “They guy said, ‘I grew up in the Bronx, and I knew the only way to have a better life would be to join the army.’” Uribe agreed to take a recruitment test “to kill time.”

“The recruiter said I was very smart and that I’d never be sent to war, I’d just have a desk job.” Uribe, whose brothers are in the military and have been unable to pursue promised college opportunities, asked when she would actually have time to get an education. The recruiter answered, “eventually.” When he called her several days later and asked whether she was still interested, Uribe answered. “No way.”

Anti-war organizations are tapping into young people’s growing skepticism about the role of the U.S. military. The New York Coalition of Radical Educators (NYCORE) created a 27-page curriculum to be used in conjunction with a film entitled “Military Myths.” The curriculum includes writing a job description for a soldier, acting out role plays of military recruitment strategies, and making diagrams to compare and contrast media coverage of Iraq from the U.S.  and abroad. The unit culminates in creating brochures to dispel military myths.

Questioning Uncle Sam: The military recruiting station at 149th and Fordham Road in the South Bronx has become a magnet for both protesters and potential recruits.
Photo: Neela Ghoshal