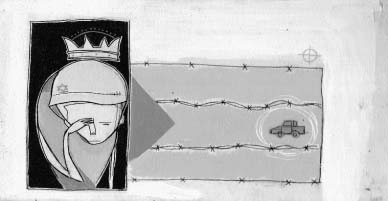 Military occupation is bad, it corrupts, it’s a dead end. It is long stretches of boredom interrupted by brief moments of terror. So, what is the responsibility of a society to the soldiers conscripted in its name? I served in the Israeli Defense Force (IDF) from 1997 to 2000. It was a different situation from Iraq, but reading the latest news, a few memories have come back to me.

1997: SKIRMISH WITH HEZBOLLAH
A positive identification. I was sure of it. A Hezbollah soldier firing from inside a house on a South Lebanon Army (SLA) outpost. While taking coordinates for the target on the map, I called up the artillery unit and gave the order to fire. It took them some time to respond, but eventually five 155mm shells razed the house and all its surroundings. I had to make decisions fast and by myself. I was only a private, but out on a lookout post I had the authority to give orders. The fighting went on and I kept looking through binoculars to give reports back to headquarters. Twenty or so Hezbollah men were attacking a well-defended SLA base. A hopeless battle for them, and nevertheless a common incident that sometimes, most disturbingly, ended with a short victory on Hezbollah’s behalf. They put up a flag and ran away before IDF gunships and cannon fire drove them away.

Rising smoke prevented me from seeing what was going on. The radio was full of screaming: reports from different lookouts, commanders arguing and HQ trying to get everything together. It was beyond me now. Only then I realized what I had done. I had been in south Lebanon for three months waiting for something like this to happen. I knew people were being killed. I knew my life was in danger since my outpost was inside Lebanese territory, but I didn’t care. Long periods of guard duty, no sleep and a lack of vacation made action my only break from routine. Just a few months before, I was calling for an Israeli withdrawal from Lebanon. Now, I was happy to do my job, protecting the country, my family. Still, that house. What a waste. The Hezbollah fighter was probably out of there by the time the cannons fired. As a matter of fact he was probably out of there by the time I gave the order. And I knew that.

1998: WEST BANK CHECKPOINT
On the outskirts of Hebron, at a roadblock near the entrance to a little village whose name I can’t remember. The year 1998 –these were times of peace, but this village was a threat according to the regional command. We switched posts with a different unit. The soldiers in the checkpoint all had masbachot, a prayer necklace made of colorful beads. One of the soldiers explained, “if a car comes and they give you a masbacha, you let them pass. If not, keep them waiting. They’ll come up with one, you’ll see.” The people of the village, still passing by, came prepared and had bags full of these precious necklaces. My officer yelled at them, “being a blackmailing thug is not part of being an IDF soldier!” The soldiers looked at each other with mocking smiles and left without another word.

One driver from the village said the unit before ours was even worse. They just made life hell with no explanation. They took people out of their cars and made them wait. When they got bored with them, they let them go and stopped the next car. It made it clear to me that a soldier at a checkpoint is like a king. Tell the people what you want, and if they don’t comply don’t let them through. Simple. Nevertheless, “we are the ones being punished here” was the saying among ourselves. The task at hand was tough. Three soldiers, 10-hour shifts in the sun and 10 hours rest for three weeks. The first few days were fine. After a week every car that passed seemed like the passengers were up to no good. I stopped more cars and made them wait longer, in search of weapons and bombs. “I never felt more stupid in my life,” commented someone from a different company one day on the way back to base, “they know that we know this whole block thing is absurd, it’s just a game everybody involved is playing.”

We always respected people, never searching more than we had to. But they didn’t want respect; they wanted to keep on going. They tried giving us masbachot, food, clothes, money. As time passed by, I noticed they got angrier. I once stopped a car with a kid that had a severely bleeding finger. The father said the finger was cut off by a knife and they were on the way to the hospital. My friend, who was in command at the time, said we must search the car. He thought it was a suspicious story. The parents were furious. A small group of bypassers stopped to watch. One old man approached while the father was showing me the engine and whispered, “this is too much. Let the family through.” We complied. Still, frustration grew on both sides. “The only solution is to be tough, don’t try to apologize for what you’re doing. They don’t care you’re not happy to be here, and smiling at them while humiliating them doesn’t make them happier. Just do your job with a straight face. Accept it as the default choice,” said Ari, my friend, who thought I was thinking about the whole thing too much. “If you don’t want to go home with a headache and a bad stomach, Yoni, stop thinking about the poor situation of the Palestinians. It sucks and that’s it. We are not here to think,” he added sarcastically.

The villagers didn’t know this, of course, but the true reason for the roadblock was that my platoon, like the ones of the previous two units, was too big for the missions in the area and our commanders had to keep us occupied somehow. Most of my platoon was on patrol duty in Hebron itself. We were the few leftover with nothing to do. Knowing this didn’t make it easier on me, but I had no choice. Disobeying orders meant prison. I had a vacation coming and a girlfriend at home, and no roadblock duty would keep me from seeing her at the end of these three weeks. I searched the cars. Some were in a hurry, some on emergency call. We stopped and searched them all, thinking this was the only fair thing to do. What if one of them was a terrorist? After nine weeks of having a roadblock at the entrance of their village, they had a good reason to try and hurt me or one of my friends. Three weeks passed. We returned to base. Once we were gone, so was the roadblock.

2000: “WE HAVE FOOTPRINTS, SOMEONE GOT IN!”
An outpost outside Israel’s border with Jordan in a territory belonging to Israel, now a demilitarized zone. A little confusing at first. Six months and time doesn’t pass. The last months of my military service. Counting the days.

Jordanian army soldiers were posted in spots opposite to our own, but in horrible conditions, miles away from their base and far apart from each other, alone in the sun for hours. Once they reached their position, on foot, they usually lay down and slept. Desert sand, wind from the Dead Sea and the Jordan River down at a distance. Always the same. Our thrill was to shoot at wild boars passing by at nighttime, claiming they looked like people trying to cross the border in the thermal night vision screen, and stopping an occasional smuggler or refugee. The biggest kick was to make up a “penetration,” as if someone actually crossed the border into Israel. An alert was set off and all forces were drawn to emergency positions. Helicopters, tanks, roadblocks, flares in the sky. All it took was one loony driver that made footprints with his shoe on both sides of the fence, and then a hysteric call to base: WE HAVE FOOTPRINTS, SOMEONE GOT IN!

At this point, I never knew if the missions I set out for were real or just another whim of one of my friends. I spent an entire day chasing a runaway alligator from a nearby farm. Everybody was behaving as if the enemy soldiers were charging the fences. “This is very serious!” cried out some commander, “the people of the valley are in danger!” Was this for real? We never found him, only alligator prints on the dusty ground. The commanding staff was constantly trying to raise the stress level by creating immediate danger. But time was my true enemy, not the soldiers who were as bored as me on the other side. My outpost bared the scars of war, many years ago. Imagine that, I thought, something happened here. Trying to make it more exciting, my officer sounded serious at the briefing we had every day. “They may look calm, and this might be a peace border,” he said, “but anything can happen – Be alert and on guard. If you see a suspect, call him to stop once, twice, and then fire a warning shot in the air… of the lungs,” he added with a laugh.