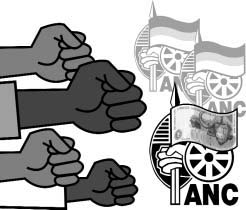 In the months leading up to South Africa’s third national elections on April 14, there was little doubt in anyone’s mind that the African National Congress (ANC) would win. The main debate amongst the mainstream political pundits and analysts who dominated the media election coverage was centered on the extent of the ANC’s victory margin.  After all, the ANC’s principal electoral opposition consisted of rightwing parties; the traditional left (COSATU and the SACP) obediently played the role of the ANC’s cheerleaders-in-chief, while the more radical social movements called for an election boycott or the casting of spoiled ballots.

The electoral campaign of the ANC was bankrolled by millions in corporate donations. President Thabo Mbeki and his coterie of ministers criss-crossed the country on a whirlwind road show especially designed to show the common touch of Mbeki and the ANC’s political elites. Readymade photo opportunities with destitute rural pensioners and urban township youth were mixed in with reconciliatory visits to ultra-wealthy townhouse complexes. The cameras clicked away, the dutiful articles appeared in the papers, and the airwaves were filled with news about Mbeki and interminable (and mostly sycophantic) interviews with various ANC leaders.

The former liberation movement parties of the left such as the Pan Africanist Congress and the Azanian People’s Organisation were left to shamelessly feed off the ANC’s scraps and show just how hopelessly out of touch they have become in confronting the neo-liberal juggernaut.

On the other side of the political tracks, anti-capitalist social movements such as the Anti-Privatization Forum (APF) and the Landless People’s Movement (LPM) used the elections period to intensify grassroots organization and struggle around the most basic socio-economic needs of the majority poor. For political, tactical and material reasons, the APF, along with several other social movements, chose not to contest the national elections.

Instead, they called on South Africa’s masses to join the social movements in the longer-term struggle to develop an alternative to the ANC, through building people’s organizations on the ground, uniting working class forces and mass action in struggle.  As to the people’s involvement in the elections, the APF called for those who wanted to participate to cast spoiled ballots, while the LPM called for a boycott through their “No Land, No Vote” campaign.

During the run-up to the elections, the ANC and the security forces it controls consistently monitored, harassed, intimidated and physically attacked activists. In two notable cases, activists were subjected to mass arrests and incarceration for simply daring to organize legitimate public protests. At the same time, the ANC went out of its way to perfect its usual “talk left” electoral message. The ANC promised heaven and earth to South Africa’s poor while ensuring, with lots of help from the media, that its “act right” neo-liberal economic strategy, responsible for mass unemployment and impoverishment, remained firmly in the shadows.

Dale T. McKinley is a South Africa-based activist and writer. He was expelled from the South African Communist Party last year for publicly criticizing the Party’s alliance with the ANC.