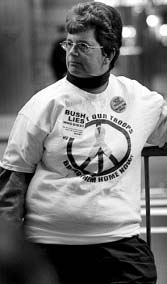 Saturday, April 24 was my wife’s 39th birthday. You awoke in your own bed in the peaceful surroundings of Camp David, perhaps, or looking out on the green lawns of the White House, or maybe enjoying the scents of wild flowers wafting in the window at your ranch in Texas. My wife awoke to the deafening noise of an explosion, and the scent of smoke. Camp Cooke was under attack. Angela picked up her protective gear that, together with her Bible and her pictures of her family, are constantly beside her bed, and ran for the nearest bunker. Moments later there were further explosions, and then the screaming began.

You see, my wife is a medic in the Arkansas National Guard, and she is deployed in your war in Iraq. She and her fellow medics ran out of their bunker, with no regard for their own safety, to try to help others. My wife will not discuss the exact events—she is prohibited from doing so—but I am an ER doctor, I have attended multiple casualty incidents, and I can imagine the scene. My wife spent the morning of her 39th birthday with her hands deep in the wounds of her fellow soldiers trying to stop them bleeding to death. While you probably enjoyed a cup of coffee, and read the morning newspaper, she spent the morning trying to breathe life back into dying lungs, trying not to look at limbs torn from bodies, trying not to look at the spreading pools of blood that she was kneeling in.

My wife wears one of my shirts to bed—she says it helps her to think of home. She was wearing this shirt yesterday morning. She will never be able to wear it again. It is now a blood soaked rag. She is sending it to me. Would you like me to send it to you, so you can actually SEE the blood you are spilling? Would that help to make this distant event more real to you? Would it make it as real to you as it is to me, and to my family, when I hear my wife sobbing on the end of the phone?

When she tells me she will never be able to enjoy her birthday ever again without thinking of the events of yesterday?  When she tells me she never wants to hear another firework in her life? When our children ask why daddy is crying?  When my wife tells me, after being awake for 36 hours straight this morning that she cannot close her eyes, because of the horrors that now await behind her beautiful eyelids?

The papers here report four dead and many injured.  Another four soldiers destroyed. Another four families devastated in this futile endeavor, started with lies and deception.  How many other families scarred and damaged? Not only the families of those physically injured, but other families, those like my family, who will live with loved ones who have seen horrors beyond that imaginable to most people.  Loved ones who will retreat to hidden places inside them, full of dark secrets, and blood, and severed limbs, and guts lying on the ground; places they do not want to go, but where they will suddenly find themselves one day when they hear a car backfire, or someone slams a door, or, in my wife’s case, when her birthday comes around again.

The people of the United States trusted you to lead us with honesty and integrity. You have let us down. Your lies and deceptions have placed the people of the United States in danger. Your lies and deceptions have destroyed the lives of families. The damage you have done will remain long after you are a footnote in history. I do not know the answer to this problem. But I do know that what we are engaged in currently is not working. There has to come a time when the people of America will realize this. Despite the best efforts of your government to sanitize the war, to hide the deadly truth from the American people, to hide the cost in terms of blood and limbs and sanity, organizations such as Military Families Speak Out, Bring Them Home Now!, and many others are gradually getting through. It appears to me that the cost is already too high. How can we end this conflict? How many more of our precious loved ones must be killed, injured or forever changed because of your misplaced aggression? We are there now, but we must get out, and we must get out soon.

This letter originally appeared on bringthemhomenow.org