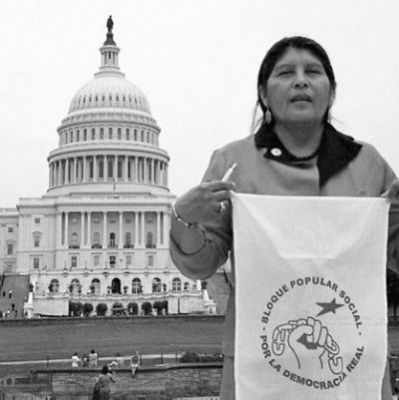 When U.S. Trade Representative Robert Zoellick met with trade ministers from Costa Rica, El Salvador, Guatemala, Honduras and Nicaragua on May 28 to sign the finalized Central American Free Trade Agreement (CAFTA), he took the opportunity to make a snide remark about CAFTA’s opponents. “You’ll pardon me if I have a bit of an ironic smile when primarily people from the United States decide to tell democracies in Central America what’s good for them,” smirked Zoellick. “We used to call that imperialism.”

But Zoellick conveniently ignores the growing social movements in Central America from which U.S. solidarity groups take their cue. CAFTA, which may be voted on by the U.S. Congress as early as July, has galvanized a powerful movement of peasants, factory workers, students, indigenous people and others in opposition to the trade deal’s potentially devastating impacts on Central American communities.

Guadalupe Erazo, a member of El Salvador’s Popular Social Bloc, spoke at Bluestockings Bookstore on June 20 as part of an anti-CAFTA tour coordinated by the Committee in Solidarity with the People of El Salvador (CISPES), characterizing the deal made largely behind closed doors, as a “seven-headed monster.”

“What is the meaning of CAFTA for Central America?” asked Erazo, who participated in the FMLN guerrilla insurgency from 1979 to 1989 and currently works with the National Association of Agricultural Workers (ANTA). “It is a plan put forth by the capitalist governments and the business monopolies that have come to swallow the lifeblood of Central America.”

Erazo said free trade is an uneven playing field, and CAFTA is an immense threat to Central America’s millions of small farmers, who would be overwhelmed by cheap, heavily subsidized products of U.S. agribusiness.

“CAFTA will be the final blow for Salvadoran peasants,” said Erazo. “[It] is a mortal attack against food security, which is the most basic right people have to maintain their lives.”

Equally troubling, CAFTA contains provisions similar to NAFTA’s infamous Chapter 11, which allows private companies to sue foreign governments for passing environmental policies that impede their business. In the first lawsuit filed under Chapter 11, the U.S.-based Metalclad corporation sued Mexico because the state of San Luis Potosí refused to allow the company to operate a waste facility that would have contaminated the local water supply.

Metalclad won the suit in 2000, forcing the state to pay $16.7 million in compensation.

While CAFTA has been most actively pursued by the Bush administration, Democrats in Congress have generally voiced support for a modified version of the agreement. Democratic presidential candidate John Kerry has said he would renegotiate CAFTA to provide for stronger labor and environmental codes.

Erazo said a “kinder, gentler” CAFTA is unacceptable because it would not address the deal’s impacts on the agricultural sector, arguing, “They cannot reform CAFTA, because it is wrong as its base.”

This July, Central Americans are planning five different summits to unite groups opposed to CAFTA, and here at home, CISPES and other groups are organizing an anti-CAFTA lobbying day in Washington, D.C. on July 19.