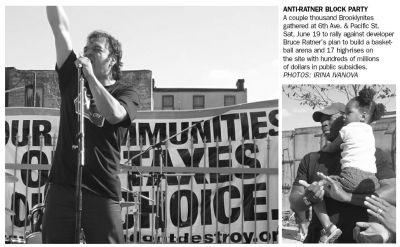 ANTI-RATNER BLOCK PARTY: A couple thousand Brooklynites gathered at 6th Ave. & Pacific St. Sat. June 19 to rally against developer Bruce Ratner’s plan to build a basketball arena and 17 high-rises on the site with hundreds of millions of dollars in public subsidies.

Despite about 200 angry protesters who chanted “We Say No” loud enough to stop the proceedings, the city Rent Guidelines Board slapped rent-stabilized tenants with a 6.5 percent increase on June 17. The rent guidelines, which affect about 1 million apartments, allow increases of 3.5 percent for a one-year lease renewal, 6.5 percent for two years, and half a percentage point less for tenants who pay for their own heat. The board’s vote was 6-3, with the two landlord representatives joining four of the five public members. Earlier in the meeting, the RGB voted 7-2 to reject a rent freeze proposed by the two tenant representatives. But in a victory for tenants, it voted 6-3 to freeze rents on single-room occupancy hotels, with each “yes” drawing cheers from the crowd.

“Facing this crowd, I can appreciate more and more how Custer must have felt,” landlord representative Harold Lubell announced. “Custer was trying to deprive the Indians of their land,” one man wisecracked. “You’re a greedy, nasty man,” screamed a woman. Lubell was soon shouted down, and the board’s redfaced chair, Marvin Markus, called a 15- minute recess. Lubell was booed more when he said, “We can’t build more affordable housing with this skewed Mickey Mouse rent system” and called for a 9 percent increase, which was rejected.

What enrages many tenants is that they feel the RGB is either clueless about or insensitive to how marginal many people’s finances are. “If they raise the rent even $50, the average person can’t afford it. That’s why we have so much homelessness and displacement,” said Anna Rivera, a tenant organizer with Good Old Lower East Side, which brought about 75 people to the meeting.

“The people who are already in the process of trying to get out of the shelters are going to take a lot longer, or end up back in the system,” said Camilla Fajardo, who spent eight months in a city homeless shelter before finding an apartment in Bedford- Stuyvesant. Angela McLean, a retired Upper East Side woman, noted that the rent on her studio apartment is slowly eating up her savings.

Such sentiments were lost on the RGB majority. They piously intoned the need to “strike a balance” between the needs of tenants and landlords. The only public member to oppose the increase was Martin Zelnik, who cited “the human dimension.” Markus, asked after the meeting what he would say to a hypothetical tenant taking home $400 a week, paying $760 a month rent, and facing a $50 increase, responded, “What do I say to an owner who’s not meeting expenses? We have to strike a balance. We don’t make deals with individual tenants.”

The process has begun to disgust many tenants and advocates. Two years ago, when the RGB’s in-house studies showe that landlords’ operating costs had actually dropped, the board voted for increases of 2 and 4 percent. Last year, when landlords’ costs rose significantly while tenants were suffering from the recession, they raised rents by 4.5 and 7.5 percent, the highest increases since the 1980s. This year, the rise in landlords’ costs was less than half as much, but the rent increases were only slightly smaller.

RGB tenant representative Adriene Holder sees a couple hidden agendas in the latest increases. The first, she says, is to set the spread between the guidelines for one-year and two-year leases wider, forcing tenants into one-year leases and letting rents go up faster. The second, she speculates, is that the increases granted are more than what some landlords actually collect, but still push the official rent up closer to the deregulatory threshold of $2,000. Meanwhile, the landlords’ main political ploy is to put the smaller, outer-borough owners forward as struggling, hardworking businesspeople; about 30 showed up at the meeting, cheering and booing for their side. In reality, most apartments in the city are owned by about 2,000 large real estate operations.

With the city’s supply of affordable housing hemorrhaging away, the tenant movement is looking at two strategies. The first is “inclusionary zoning,” requiring developers to include a percentage of affordable housing in any apartments they build. The advantage of this is that with government funds scarce, it leverages private investment dollars. The disadvantage is that it could easily degenerate into the typical “80/20 housing,” in which only a token 20 percent of apartments are set aside for lowincome tenants, “middle-income” units can cost $1,800 a month, and large luxury projects drive up rents in the surrounding neighborhood.

The second is repealing the Urstadt law, a legacy of former Gov. Nelson Rockefeller’s disastrous 1971 vacancydecontrol law that bans the city from enacting rent controls stronger than the state’s. Some upstate and suburban Republicans might be sympathetic to the repeal if it’s framed as a home-rule issue, but as long as the state Senate’s GOP majority is financed by campaign contributions from city real-estate interests, it’s about as unlikely as Utah legalizing gay marriage. A little-discussed possibility is a citywide rent strike to demand lower rents. This would be dangerous, exposing people to violent eviction, and would require a degree of organization about 100 times as massive as what the tenant movement is currently capable of doing. On the other hand, you could have said the same thing about labor unions going on strike in the 1930s.