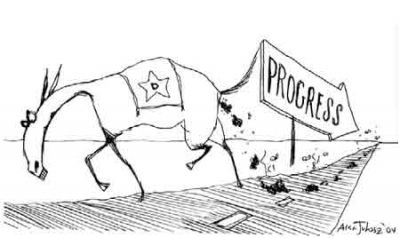 “If you don’t stand for something, you’ll fall for anything.” That’s what Malcolm X said 40 years ago when confronted with elections that didn’t offer substantial solutions to the problems his people were facing. After decades of lesser-evilism as the official progressive approach to elections, talking principles is taboo.  To the unleashed hordes of pissed-off liberals, it’s downright dangerous, and, if you have the nerve to run for president on what you actually believe, “egomaniacal.”

CounterPunch.org is one of the few websites around that’s sure to buck the party line, no matter what party you’re sweet on. Just when the established left-wing press lock-stepped into Anybody But Bush orthodoxy, CounterPunch’s editors, Alexander Cockburn and Jeffrey St.  Clair, went on a tear, exposing the actual record of the Democratic Party’s evil lessers. Collecting two dozen of the best essays from their website, Dime’s Worth of Difference is essential reading for anyone who wants to know what they’re voting for, not just against. The results are damning.

Generally sympathetic to Ralph Nader, Dime’s Worth of Difference nails the coffin on liberal illusions about what the Democrats really offer by digging into their record on the issues that matter the most.

Looking back over the reign of the last lesser evil, contributor JoAnn Wypijewski tallies the results of the Clinton era through the eyes of a former Rainbow Coalition volunteer.  “[T]he black stripe of the Rainbow got the Crime Bill, women got ‘welfare reform,’ labor got NAFTA, gays and lesbians got the Defense of Marriage Act. Even with a Democratic Congress in the early years, the peace crowd got no cuts in the military; unions got no help on the right to organize; advocates of DC statehood got nothing…the single-payer crowd got worse than nothing. Between Clinton’s inaugural and the day he left office, 700,000 more persons were incarcerated, mostly minorities; today one in eight black men is barred from voting because of prison, probation or parole.”

In short, anybody who is poor or hopes America might be something better than a latter-day Rome had better get used to the fact that neither party plans to dish out much besides more of the same. How else to explain that despite 80 percent opposition to the Iraqi war from Democratic primary voters, yet another DLC hawk got the nod? For anyone who doubts the depth of the Democrats’ complicity in the “Bush agenda,” you have to pick this one up. Sticking your head in the sand won’t stop the tide from crashing up the beach.