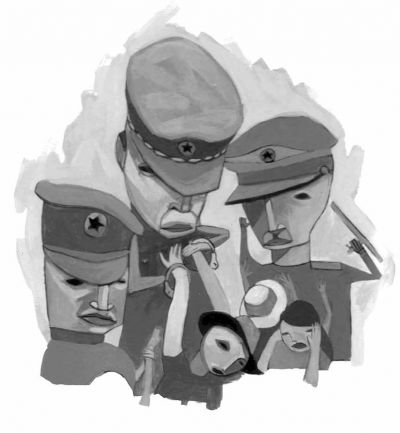 While activists took the streets of New York Aug. 31 in response to the Republican National Convention, a direct action of a different sort, in the Guatemalan state of Retalhuleu, culminated in brutal violence. Police officers surrounded campesinos who had taken over the Nueva Linda plantation in the municipality of Champerico. The ensuing confrontation resulted in at least nine deaths and dozens wounded or missing.

“Once more it has been shown that the government defends the interests of large plantation owners through violence,” said Daniel Pascual, a leader of the National Coordinating Body of Campesino Organizations, in an interview with Guatemalan national daily newspaper, El Periódico.

Government representatives justified the violence, blaming it on the presence of armed campesinos. “Although we regret the deaths that occurred, this eviction complied with the law,” said Carlos Zúñiga of the Chamber of Agriculture. “The police officers were taken by surprise by violent and armed people who, in spite of having lost the judicial process, continue creating instability in the country.”

The violence at Nueva Linda harkens back to the scorched earth policies of the early 1980s, when hundreds of Mayan villages were razed to the ground by the army. Witnesses cited the burning of 500 houses at Nueva Linda, the extrajudicial executions of at least three campesinos, and the beating of journalists who witnessed the events.

A History Of Occupations
Guatemala has a long history of land takeovers, in which landless peasants, reluctant to relocate to city shantytowns and sweatshops, peacefully occupy plantations, carving out spots to plant their corn and beans. Land reform has not been a priority of Guatemalan governments since the days of Jacobo Arbenz, the liberal president deposed by the 1954 CIA-orchestrated coup that touched off 36 years of civil war. While it reemerged as a theme in the nation’s 1996 Peace Accords, progress has been slow to nonexistent. A government agency has been established to address land claims, but hundreds of communities, many uprooted during the war, remain on a waiting list. Illegal plantation occupations have been, for many, the only way to survive.

A national strike organized by workers and campesinos on June 8 so successfully immobilized the nation’s economy that President Oscar Berger, of the conservative Grand National Alliance, immediately promised a 90-day moratorium on violent evictions of peasants while reviewing potential land reform strategies. In return, groups representing the peasants agreed to hold off on protests for the duration of the 90 days.

The agreement broke down with the Nueva Linda eviction, which Justo Mendoza of the National Coordinator of Indigenous and Campesino Communities described as “a massacre.”

“Their Voice Was Never Heard”
The Nueva Linda occupation began in protest of the government’s inaction in investigating the disappearance of a campesino leader. Hector René Reyes Pérez, an administrator at Nueva Linda known for taking the side of the workers, disappeared on Sept. 5, 2003. His disappearance followed a disagreement with plantation owner Vidal Fernández Alejos. Reyes was last seen with the owner’s bodyguard, Victor Chinchilla.

On Oct. 13 of last year, campesinos occupied the plantation in protest, demanding an investigation of Reyes’s disappearance. They would leave, they declared, once the Ministry of Justice complied with its duties in the investigation.

On Aug. 25, a new Ministry of the Interior, Carlos Vielmann, promised to “get tough on the land invasions.” He delivered on that promise Aug. 31.

Between 1,000 and 2,000 heavily armed police officers surrounded the community at 5 a.m. to initiate a dialogue with the campesinos, some of whom were also armed. It is unclear how the violence began. Carlos Quintana Saravía, governor of Retalhuleu, charged the campesinos with initiating the conflict by throwing homemade bombs at the police. Alexander Toro of the Human Rights Ombuds office demurred, citing a police blueprint for the eviction stating that if the campesinos refused to leave, the police would proceed with force.

Witnesses reported unprovoked police brutality. Journalists videotaped the police shooting an elderly man six times. They were subsequently beaten by police, their equipment confiscated. The Guatemalan newspaper Nuestro Diario quoted one journalist: “A police officer told me ‘If you take photos I’m going to kill you just like him’ and then he pointed his gun at a campesino and killed him.”

Julia Cabrera, a single mother of 10 children, told El Periódico that she witnessed police shoot her sixteen-year-old son twice in the back, killing him. Another child disappeared.“But I did not see who took my six-month old baby,” said Cabrera, “because the police grabbed me by the hair and began to hit me.”

President Berger argued that the extreme measures taken by the police were necessary since the campesinos were armed and, he claimed, had links to organized crime.

Guatemala’s Congress has taken the campesinos’ side, condemning the violence and calling for an investigation. A commission has been formed to search for the 20 to 30 people who were missing following the violence. Campesinos told representatives of the Human Rights Ombuds office that they saw police hastily throw bodies into a mass grave on the plantation, but a grave has not yet been located.

Campesino organizer Ursula Roldán told El Periódico that the events were a result of government inaction in the Reyes case and lack of attention to campesino concerns. “The indigenous and campesino groups organized marches and protests so that [Reyes’s disappearance] could be clarified, but their voice was never heard,” said Roldán.