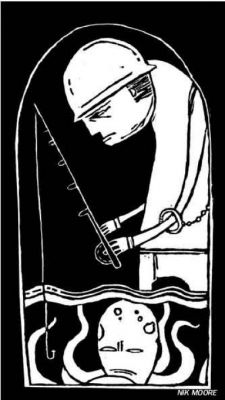 Harold Daggett, an ILA General Organizer rumored to be next in line to lead the union, was arrested in July for extorting money on the waterfront. An International Longshoremen mid-level vice president, Louis Saccenti was charged with perjury this past summer as well. In testimony before the New York/New Jersey Waterfront Commission in October 2003, International President John Bowers spoke about the meeting to decide how Daggett was to become his successor. The meeting took place in a restaurant with recently indicted Miami longshoremen official Arthur Coffey and CW-1, who muscled Bowers into choosing Daggett as the next ILA President. “I know [Barone’s] reputation, I am not going to ask a lot of questions. I am figuring now how the hell to get out of the place,” said Bowers, according to federal court documents.

The feds aren’t the only ones responsible for the ILA leadership’s legal troubles. Rank-and-file longshoremen are waiting on word from a Manhattan federal judge on whether their master contract will be struck down. The Indypendent reported voting irregularities and possible fraud during the union’s June contract ratification.

“We filed a lawsuit and an injunction to stop them from ratifying the contract. This effort is about the contract, but also to empower working people in the union,” said Leonard Riley of Local 1422 in South Carolina. Riley and others contend that international officials, some with close ties to organized crime, take care of their home ports at the expense of others.

“We feel strongly that some who are international and local officers haven’t represented the whole coast. They use their clout to get better deals in their local agreement,” commented Riley. Locals ratify a master contract and then must bargain their own local contracts with the stevedore companies.

Riley gave as an example the International’s pension fund. In Port Charleston, South Carolina, the pension is based on man-hours on the pier, which Riley said brought in more than $20 million. In contrast, in New York, shipping companies pay into the fund based also on tonnage moved. Riley calculated that Charleston would gross more than $200 million if its pension was based on tonnage.

Longshoremen dissidents held a meeting in Virginia last month to discuss and strategize for creating a democratic union. Veteran Baltimore Local 333 member John Blom has been active passing out fliers, talking to co-workers, and traveling to other ports to speak out against concessions in the master contract.

“The primary issue in Baltimore with young workers is lack of a wage bridge,” Blom said. The master contract, if a judge rules it is valid, provides no way for new hires in the ports who work enough hours to gain significant pay increases. “Because younger people are employed at a lower rate, it’s cheaper to give them the work and that means there is less for [veteran workers].”

The Port of Baltimore voted down the master contract by a 5-1 majority. Blom also contends that a couple years ago international leaders set up Baltimore Local 2066 as a “ghost local” with few real members to take jurisdiction and power from his local. Local 2066 unanimously voted for the master contract – with only five people voting. ILA members in the Philadelphia-Delaware region still haven’t negotiated a local contract and haven’t ruled out a job action. “It looks very critical. We’re the largest local in Philadelphia and Delaware, and we’re not taking any cuts,” said Local 1291 Vice President Royce Adams.