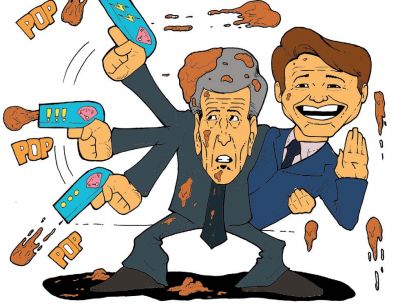 The Republican Party knocks voters off the ballot. The Democratic Party knocks candidates off the ballot.” This statement by Kevin Zeese, spokesperson for Presidential candidate Ralph Nader and running mate, Peter Camejo, illustrates the growing anger of the Nader campaign with the Democrats’ attempts to deny them ballot access.

The Democratic Party, charges the Nader campaign, is conspiring with public officials, lawyers and corporate lobbyists to force the three-time presidential candidate to expend precious resources in stateby-state court battles rather than articulating a campaign message.

Toby Moffet, a former Democratic Congressman from Connecticut who worked with Nader decades ago, recently started a group called The Ballot Project whose mission, Moffet said, is to “neutralize [Nader’s] campaign by forcing him to spend money and resources” defending his right to appear on the ballot.

David Jones, a former staffer for Rep. Dick Gephardt (D-MO), founded the National Progress Fund, which coordinates strategies to remove the Nader-Camejo ticket from the ballot. Jones’s website, NaderFactor.org, recently began airing ads charging a conspiracy by the GOP to fund Nader. Democratic National Committee chairman Terry McAuliffe claimed that, “in state after state, Nader has become an extension of the Republican Party and their corporate backers.”

Writing in the Washington Post on Sept. 5, Nader counters that only four percent of his campaign contributions have come from Republicans. In a press release dated Aug. 19, the Center for Responsive Politics stated that 51 donors identified as Republicans donated $54,300 to Nader while contributing even more – $66,000 – to Democrats.

On Aug. 30, Maine Democratic Party chairwoman Dorothy Melanson testified in a public hearing that the national Democratic Party is funding efforts throughout the country to stop Nader from appearing on ballots.

In Pennsylvania, Democrats utilized help from Reed Smith, a corporate law firm that supports many Republican candidates, to keep Nader off the ballot. Thus far, they have succeeded, arguing that his appearance on the ballot as an independent violates state law because he is running under the Reform Party on other state ballots. An appeal by Nader to the Pennsylvania Supreme Court is pending.

Democratic Secretary of State Bill Bradbury removed Nader from Oregon’s ballot, claiming that pages of petitions signed by registered voters were incorrectly numbered. After these signatures were purged, a second set of petitions were disqualified, preventing Nader from appearing on the ballot. District Judge Paul Lipscomb intervened in the matter, asserting that “Secretary of State Bill Bradbury violated election laws,” and in fact, “made up laws” to deny Nader ballot access. Nader will appear on the ballot.

On Sept. 17, the Florida Supreme Court, as well as district judges in Colorado and New Mexico, ruled on legal challenges brought by the Democratic Party against Nader/Camejo.

A district judge in Colorado rejected the Democrats’ argument that because Nader was not affiliated with the Reform Party for a year before he was nominated, Nader had no right to ballot access.

New Mexico Judge Wendy York, who contributed $1,000 to John Kerry’s campaign in April, ruled that Nader’s appearance on the Reform ticket in other states prohibited him from running as an independent. York’s ruling overturned the precedent set by other independent candidates in the state. In 1980, Rep. John Anderson ran in New Mexico as an independent presidential candidate while running under a variety of parties in other states. The Nader campaign has appealed this ruling.

In Florida, a Democratic judge ruled that the Reform Party was unable to nominate a candidate because they were not a national party, barring Nader from the ballot. Florida’s Supreme Court rejected this argument, reinstating Nader by a 6-1 verdict.

Interestingly, the St. Petersburg Times reported that the Bush campaign filed its election documents a day late to the Florida Secretary of State. Thus, President Bush has no legal right to appear on the ballot in Florida. Yet, rather than using their resources to challenge the Bush campaign, Florida Democrats chose to fight Nader instead.