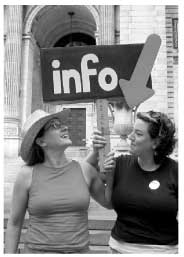 More than 150 library workers fled the stacks during the Republican National Convention to join a protest-support group centered around doing what they do best: answering questions. The self-titled Radical Reference Librarians answered queries online and on the streets at protests, from demonstrators in need of anything from a little academic anti-Bush ammunition to directions to the nearest public restroom.

But as demonstrators and Republicans abandoned Manhattan after the convention, the librarians discovered one group of people that still needed reference assistance – the media.

Jenna Freedman, a reference librarian at Barnard College in New York and a co-founder of Radical Reference, said that part of the group’s original purpose was to assist in rumor control during protests. “We were there to track down the truth by calling back to librarians with web resources,” she said.

The librarians have narrowed their focus after the convention. “By supporting the independent media, we are supporting the fight for democracy and all that librarians hold dear: truth, access to information and the struggle against censorship,” Freedman said.

The librarians’ nemesis, the USA Patriot Act, includes broadly worded sections that can be interpreted to allow the FBI to search library patrons’ circulation records and Internet usage during investigations.

To fight back against the act and to alert activists of their services, the Radical Reference library workers scrapped the traditional role of shushing patrons and instead, led protesters in chants for freedom of information.

The librarians touted the letter “i” for information on their hats, patches and signs at protests. They provided protestors with lists of delegates’ hotels and war profiteers and helped people find public restrooms and subways. Back at their reference desks, other library workers found information online and relayed it by phone to librarians on street reference duty.

The group also created a website prior to the convention that served as a question/answer service. People posted inquiries such as, “At what age are you old enough to be put into an adult cell when you are arrested?”

The switch to fact-checking workshops, Radical Reference members said, is part of their overarching goal to relay the truth. They will also offer instruction on source evaluation and the public resources available to journalists.

Matthew Baiotto, a senior librarian for the New York Public Library, was in the Critical Mass bike ride when he was captured. The police drew orange nets across the street near Union Square to corral Baiotto and a group of other cyclists, he said.

Although it couldn’t save Baiotto from jail, the librarians’ intricate communication sys- tem allowed Freedman, the co-founder, to dispatch nearby street reference librarians to check on his release.

The communication system extended beyond Radical Reference to a sprawling inter-library information cabal – a club for those who are literally in-the-know. Librarians everywhere heard about the group through e-mail lists and websites, and contributed information.

One of the most important tips Radical Reference received came from a library employee of the New York Historical Society. The informant hinted that Laura Bush would attend a luncheon at the Historical Society on the Wednesday of the convention.

The first lady represents what Radical Reference librarians consider hypocrisy – she
was once a librarian, with a masters in library science and a job at a public library, but she married a man who signed the USA Patriot Act into law.

To remind Bush of her former career, Radical Reference librarians gathered outside the Historical Society on Central Park West with cardboard signs, chanting, “Money for books and education, not for war and occupation,” and “Stand up, fight back, against the USA Patriot Act.”

Although they weren’t present at the luncheon, officials of the American Library Association share a similar perspective on the USA Patriot Act. A spokeswoman for the library association said the organization is non-partisan, but it “considers sections of the USA Patriot Act a present danger to the constitutional rights of library users.” The spokeswoman, Larra Clark, said the library association had no official statement concerning Radical Reference.

Other librarians take a more conservative stance. One librarian at the Billerica Public Library in Massachusetts started a website called “Librarians For Bush” in direct response to “Librarians Against Bush,” a subgroup of Radical Reference. “They are blowing the USA Patriot Act out of proportion,” Greg McClay, creator of Librarians For Bush, said in a phone conversation. “They don’t take into consideration that we are at war.”

Radical Reference librarians may have put away their “i” hats and returned to the annals of the Dewey Decimal system, but they will continue to promote their work. Even if President Bush loses the election, the librarians said they would stay together to fight for patrons’ rights and accurate reporting. “Besides, have you seen Kerry’s platform?” Freedman said.