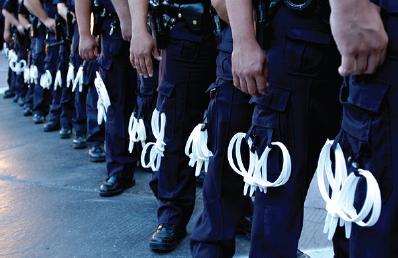 By Stevewishnia and Tim Sparkman

Before last month’s Republican convention, Mayor Mike Bloomberg and the New York Police Department boasted that they were ready and able to handle 1,000 arrests a day.

Police were extraordinarily efficient at making arrests, corralling scores of people at a time within orange nets and seizing over 1,800 people during the week of the convention, including 1,100 on Aug. 31. They weren’t so efficient at processing the prisoners. The city set up a special detention center for arrested protesters (and bystanders) in an old bus depot besludged with automotive offal. They postponed regular criminal cases to clear the courts for arraigning convention detainees, but kept hundreds of people in jail for far longer than the legal 24-hour limit.

Those contrasts have left many wondering whether Bloomberg and Police Commissioner Ray Kelly had a deliberate policy of pre-emptive detention. “There was obviously some kind of collusion or coordination between local effort and the RNC in terms of trying to make sure that this was as muffled a protest as possible,” charges City Councilmember Bill Perkins (DManhattan), who chaired a Council hearing on the police tactics Sept. 15. “I don’t think they were overwhelmed. I believe that they purposefully delayed the detainees.”

In the courts, says New York Civil Liberties Union (NCLU) lawyer Christopher Dunn, “the judges were there, the district attorneys were there, but there weren’t any arrestees.” There are “more questions than evidence” about whether the delays were intentional, he says, but the Bloomberg Administration “hasn’t offered any credible information as to why people were held so long.”

“My suspicion is that it was intentional,” adds Bruce Bentley of the National Lawyers Guild. “Do we have absolute proof? No.”

Calling such allegations “ridiculous,” councilmember Peter Vallone, Jr. (D-Queens) said, “It would have actually helped the Republicans if there was violence in the streets.” According to Vallone, the delays were “what happens when a thousand people break the law in a four-hour period.”

The NYPD’s press office refused to comment over the phone, saying they would only take questions submitted in writing, and responded to an e-mail with the message that they “Do Not Accept E-Mail Requests. Please Phone This Office.”

Arrests: The Orange Dragnet
The NYPD’s main tactic was mass arrest, primarily at the Aug. 27 Critical Mass bicycle ride and on Aug. 31, the day of numerous small direct-action protests. They moved with remarkable precision, sending large teams of officers to head people off at gathering spots, or setting traps, like the East 16th Street snare on Aug. 31. There, police nabbed about 300 protesters at once by forcing them onto a blockedoff side street off Union Square and enclosing them with orange netting.

“They forced us onto the sidewalk, [shouting] ‘Move, Move, Move,” says Jeffrey Parrot, one of those arrested. “Then they started attacking, rushing around and pulling people out for arrests.”

Kathie Bell, 55, an activist and real estate salesperson from Chelsea, was also arrested on 16th Street. She says police told the crowd “‘if you’re peaceful, we’ll let you go’ – then they arrested us.” She was eventually charged with parading without a permit and two counts of disorderly conduct.

The NYCLU’s Dunn says that such “indiscriminate” arrest tactics ensured the arrest of innocent people: “Any time you use nets to trap an entire block or a section of sidewalk, you’re guaranteed to get people who were not doing anything illegal or not part of the demonstration.”

“I wasn’t protesting that day,” says Wendy Stefanelli, 35, a clothing stylist from Brooklyn who was arrested at East 26th Street and Park Avenue South on Aug. 31. She was on her way to meet her boyfriend when she saw police throwing a man to the ground. When she tried to call a friend who works for the NYCLU, a man in civilian dress – who’d previously suggested that she leave the area – told police, “Arrest those two girls.” She too was charged with parading without a permit and two counts of disorderly conduct.

Many people say police couldn’t or wouldn’t tell prisoners why they were being arrested. “My arresting officer didn’t know what I was being arrested for,” says Bell. Parrot says that when he asked what he was being charged with, the officer told him, “I don’t know, probably disorderly conduct.”

Pre-emptive mass arrests are a common tactic to disrupt protests; police used them at the 2000 demonstrations against the International Monetary Fund in Washington and the Republican convention in Philadelphia. But New York police have generally preferred to use massive numbers of officers and obsessive penning.

That has changed, says Brooklyn College sociology professor Alex Vitale, a co-author of the NYCLU’s report on the suppression of the Feb. 15, 2003 antiwar demonstration. “This approach of rounding up people who have not committed any criminal act under the pretext that they are blocking the sidewalk was used on a wide scale in both Times Square on Sunday the 29th and throughout the day on Tuesday the 31st in numerous areas including Ground Zero, Union Square and the steps of the New York Public Library,” he says. “It is a disturbing and unconstitutional development.”

Arraignments: With All Deliberate Speed?
Of the more than 1,800 people arrested, 1,480 were charged with violations, primarily parading without a permit and disorderly conduct, says Bruce Bentley. The rest were charged with misdemeanors, mostly obstructing governmental administration – a charge that basically translates as “disobeying a police officer” –and resisting arrest. Fifty-six were accused of felonies. All but a handful of those, according to Bentley, have been reduced to misdemeanors.

The main exceptions are Jamal Holliday, a Harlem youth charged with assaulting a plainclothes detective who rode his motorscooter into a crowd of protesters on Aug. 30, and Yusuke “Josh” Banno, an Arizona anarchist accused of setting fire to a papier-maché dragon at the Aug. 29 march.

Most of the detainees are taking ACDs, adjournments in contemplation of dismissal –which means that if you don’t get arrested again within six months, the records are supposed to be sealed, but if you do get arrested again, you have to face both the old and new charges. Others received DATs, desk appearance tickets, essentially a summons.

Under a 1991 ruling by the state’s highest court, everyone arrested in the city must be arraigned or released within 24 hours, except in extenuating circumstances. During the convention, hundreds of people were held for two days or longer, and were only released after State Supreme Court Justice John Cataldo held the city in contempt Sept. 2.

“It had the appearance of intentionally slowing it down,” says Bruce Bentley. “They were arraigning people on serious felonies faster than they were on DATs.”

“There’s something fundamentally wrong with 10 hours in jail for shoplifting and 48 hours for protesting,” says NYCLU executive director Donna Lieberman.

In the habeas-corpus writ filed by the National Lawyers Guild Sept. 1, Connie Steensma of Manhattan alleged that when she called Central Booking to find out what happened to her 17-year-old son, she was told “all of the demonstrators would be held until after President Bush left town.” Kathie Bell says a police officer at Pier 57 told her “you’re being detained to keep you off the streets.” Other detainees say police were simply confused and disorganized.

Many people are already planning to sue the city for false arrest, being held for more than 24 hours, and the conditions at Pier 57. The NYCLU is “certainly” going to litigate on two issues, arrest tactics and the length and condition of detention, says Dunn. However, the suit will be aimed at stopping such practices, not at winning damages for individuals. The Guild plans to sue for unlawful arrests and infringement of First and Fourth Amendment rights, says Bentley. Additional information is likely to emerge in these lawsuits, when the city will be forced to turn over records to the plaintiffs’ lawyers.

Judge Cataldo will hold a hearing Sept. 27 on whether to hold the city in criminal contempt for keeping 470 people in jail past the court-ordered deadline to release them.

The city’s failure to meet that deadline, says Alex Vitale, “suggests that there was either gross negligence by numerous police supervisors… or there was an intent to keep people off the streets as long as possible.”

“Courtesy, Professionalism & Respect”: Police give a protestor CPR on the streets of NYC. Photo: Antrim Caskey