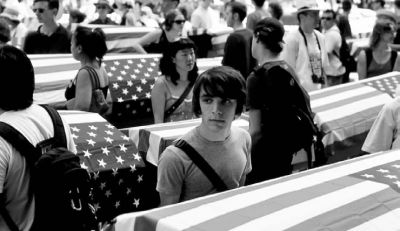 If you were reading the papers before the Republican convention, you probably heard about United for Peace and Justice, organizers of the Aug. 29 march against the Bush agenda. Despite squabbles with the city and the police department over the use of Central Park as a rally site (the city eventually sided with the grass), the event came off almost without a hitch, drawing 500,000 people.

Writer, editor and activist Leslie Kauffman serves as UFPJ’s mobilizing coordinator, working to bring individuals into the peace movement. This week she sat down with The Indypendent to discuss her work, the march and the 2004 presidential elections.

How long have you worked for United for Peace and Justice?
I came on board pretty much as soon as there was a staff, in January 2003. It was supposed to be short-term, but the response to the February 15 march was enormous. We held another big march two days after the war began, on March 22, 2003. By May, when Bush declared mission accomplished and that major combat operations were over, we had hundreds of member groups – with more groups signing on. It was around then that it became clear that we were going to continue to have an office in New York City and a full-time staff.

Were you let down at all that the February 15 event didn’t stop the war from happening in the first place?
Of course, to do the work you had to have some hope that we could actually stop the war, but I was fairly pessimistic about our ability to do so. What we did do – February 15 was the single largest day of protest in world history, ever. And while we didn’t stop the war, the war has unfolded very differently than it would have if there hadn’t been that massive opposition. The Bush Administration was not able to rally international support in a way that it would have been able to otherwise.

What did it look like around here the few weeks leading up to this most recent march?
A lot different than it does now. At times there were fifty to a hundred people working in this space – just a constant whir of activity: people putting together posters, meetings every night, lots of press conferences. Obviously there was a lot of news unfolding around the whole permit fight.

Do you feel it was a mistake to have accepted the West Side Highway rally site at first, only to turn it down later on?
You know, the West Side Highway decision was one of the difficult decisions UFPJ ever made. There was strong internal disagreement about whether or not to accept the site. It’s clear that reversing the decision was absolutely the right thing, and that it was what our grassroots base wanted us to do. Obviously we would have liked to have had a march that went up past Madison Square Garden to Central Park through Times Square. That’s what our ideal would have been. But in the end it all worked out. We had half a million people marching in the streets, twice what we were expecting months ago.

How do you measure the impact of a huge event like that?
It’s always hard to say with a protest at the time what it has sparked, what it has achieved. Clearly one of the things we were looking to accomplish was to be on the front page of every major newspaper around the world on the opening day of the Republican convention. And we were. We were the top news story in every major media outlet around the world – El País in Spain, the major dailies in Japan, all except CNN.

So that was a concrete, measurable goal that we met. Our long-term framework, though, is the desire to see a grassroots movement flourish around the country. What I hope people will take away from an event like August 29 is that there are many different ways to contribute. We have a directory of hundreds of groups listed that you can contact and join. We have huge numbers of events listed on our calendar of ways to plug into different organizing efforts.

What would you say to all those people who went to the march, were really jazzed up by what they saw there, then came home and watched Bush’s approval ratings improve?
I think it’s really hard to see the effects of this kind of work. When you organize, you have to operate on faith that if you stir things up enough, and help inspire enough people to take action, that good things will come of it down the road, that changes will result.

If John Kerry is elected, do you think some of this activist fervor will die down?
The experience during the Clinton years was that there was an initial demobilization and then there was a quite powerful resurgence of some very innovative, dynamic, quite radical movements. You saw the flourishing of Earth First!, you saw the flourishing of the global justice activism that was on display in the Seattle WTO protests. There was a lot of really powerful, important organizing that came into being during the Clinton years.

So is it possible that there’ll be some shortterm demobilization as people become wrongly complacent thinking that electing a Democrat will be the answer to any number of problems the country faces? Yeah, it’s possible. But I think that if so, it’s likely to be short-lived.