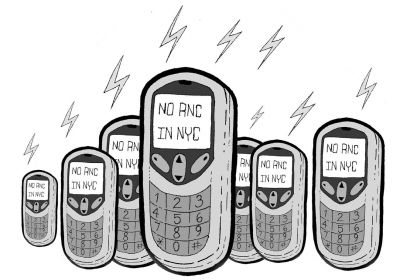 The guerrilla musicians from the Infernal Noise Brigade were tuning their instruments, preparing to lead an unannounced, unpermitted march from Union Square to Madison Square Garden. Independent journalists from the Indymedia Center were putting fresh cassettes in their video cameras. The cops were milling about waiting for whatever was coming.

Throughout the Republican convention, independent journalists and activist groups used text-messaging technology to coordinate a groundbreaking week of direct action and comprehensive news reporting. It was one of the many creative, guerrilla tactics employed by the decentralized resistance movement in North America that grew out of the WTO protests in Seattle in 1999. In contrast to the multimillion dollar security budgets for the Democratic and Republican conventions and at the recent FTAA meetings in Miami, activists are using technology that is virtually cost-free to mobilize hundreds of actions and thousands of activists.

In addition to the various groups using text messaging to send out action alerts, warnings, news and announcements, the New York City Independent Media Center set up an automated “info-line” that activists could call 24 hours a day to hear breaking news from Indymedia, a calendar of events or a live stream from the A-noise radio collective, which was broadcasting from the streets. At protests past, the work of Indymedia was primarily available to people at home through the Internet. In New York, it went mobile. And it was a huge success.

“Our task is to help facilitate horizontal communication and information distribution to all the activists in the streets,” says Evan Henshaw-Plath, the Indymedia tech activist who developed the info-line concept. “The police want to keep the protests under control and stay a step ahead of the protesters. So, all of this communications infrastructure helps on a tactical level. We’ve appropriated technology as an essential tool for radical social change.

“When there is a blockade or arrests, activists know where to go or how to avoid arrest,” Henshaw-Plath says. “All of this helps make the protest more effective.”

The project grew out of a concept developed by Aspiration Tech of San Francisco a few weeks before the RNC. It was based on a software package called Asterisk, which takes information from the Web and converts it to speech to provide it to mobile phones. “It was a last-minute project, which showed how, using free software and about $10, we could create quality phone-based information systems,” says Henshaw-Plath. After getting the system set up, he adds, a casual conversation lead to the topic of “wouldn’t it be cool to do something like this for the RNC protests next week?” Despite almost no publicity, the service received more than 2,000 calls over a four-day period.

The text messaging was coordinated primarily by using a free service from a website called TXTMob.com. Users could create a personal account free of charge and sign up for groups similar to e-mail list-serves. Some were unmoderated and had unreliable information. But others, like the ones operated by nyc.indymedia.org and the NY Comms collective, were moderated and accurate.

“There is this ongoing problem of lack of media coverage of protest activity, particularly in the United States,” says the founder of TXTMob.com, who goes by the nom de guerre of John Henry. “Text-messaging becomes another tool in the activist arsenal, a way of representing their actions to the outside world in a direct manner, rather than being dependent upon establishment mass media to tell their story for them.”

TXTMob launched two days before the Democratic National Convention in Boston. Its overhead cost was the donated labor of Henry and others from the Institute for Applied Autonomy, an art and engineering collective that develops technologies for political dissent. In Boston, 200 people subscribed to the service. In New York, there were more than 5,500, a number that far exceeded Henry’s expectations.

“Having this kind of communication infrastructure allows much more spontaneous, fluid kinds of actions that can be taken in response to real-time events,” says Henry. “It maintains the element of surprise, which ultimately makes them more effective.”

A perfect example of this was on Aug. 29, when the Mouse Bloc staged a series of spontaneous street theater protests in Times Square. During the RNC, Republican delegates had been offered discounts to Broadway shows ahead of the week’s activities. For hours, the police chased activists around as they confronted delegates coming out of the theaters. When the cops would shut down one action, text messages directed the activists to the next target. Police undoubtedly received the text messages along with the activists, but the spontaneity forced them to engage in a cat-and-mouse game with the activists.

The text messages alerted activists to routes that remained open to travel to protests outside Madison Square Garden, as the police blocked off large sections of the city. They alerted independent journalists to where cameras were needed to document protests, legal observers to real-time rights violations, and activist medic teams to where people were in need of medical attention.

But with the real-time updates for activists comes a conundrum: If anyone can utilize the service, wouldn’t that mean that law enforcement could use it against the demonstrators or to shut down direct actions preemptively?

“The big question in my mind is whether our breaking-news reporting is more useful for us or for the police,” says Indymedia activist Josh Breitbart. “The group that probably made most immediate use of the information was the NYPD.”

One journalist posted the following report: “The Entire Scooter Goon Squad is wrapped around Fifth and 48th reading Indymedia from an Internet phone booth. Everyone should come by and bring your video cameras.”

Jeremy Scahill is a producer/reporter for the national radio and TV show Democracy Now! He can be reached at jeremy@democracynow.org.