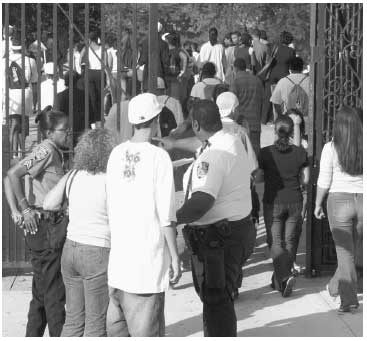 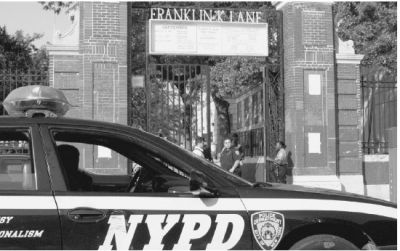 It is 7:30 a.m. A cool, bright, September morning ushers in the new school year along Jamaica Avenue near the border of Brooklyn and Queens. High school students in flat-brimmed caps and oversized tees maneuver around rumbling delivery trucks, earning honks from frustrated drivers as they head towards Franklin K. Lane High School. School won’t start for over an hour but the day is well underway for the students, who are already lining up to get through security checks before their first classes.

Metal detectors have long been a reality for high school students in New York City, but for those attending schools like Lane, security means much more than the inconvenience of metal detectors. Last winter, the school was named one of the “Dirty Dozen” along with eleven other high schools and junior highs that were labeled the most violent schools in the city. In response to increasing concerns over violent city public schools, Mayor Bloomberg and School Chancellor Joel Klein teamed up with the New York Police Department in January of 2004 to implement “Operation Impact Schools.”

The school security program placed about 150 on-duty New York Police Officers, in addition to existing School Safety Officers, inside twelve “Impact Schools.” The program also included the establishment of a “zero tolerance policy” toward students who repeatedly violated school discipline codes. These students would become “Spotlight Students” and be subjected to a “Three strikes you’re out” policy. If a Spotlight Student committed three violations, they would be removed from the school and placed in “Off Site Detention Centers” then reassigned to special “Second Opportunity Schools.”

The philosophy behind Operation Impact Schools grew out of other policing programs implemented in the city last year. Operation Impact began in January of 2003, when police, using COMPSTAT (a database that compiles crime statistics and maps them according to crime severity and precinct), created a list of the highest crime areas and increased police presence in those neighborhoods.
Mayor Bloomberg declared Operation Impact a success a year later, citing 364,000 summonses and almost 31,000 arrests. In the wake of that, the city launched Operation Impact Schools, which would take these policies to places like Franklin K. Lane High.

“If y’all have I.D. you get on the left, if not get on the right. No parents in the school, repeat, all parents must stay outside the gate, you will not be allowed inside the school!” shouts Officer Robinson at returning students as they saunter toward the iron gate she is guarding. Robinson’s steady stream of commands is hardly the only sign that strict security is in effect. Students also receive orders from a cluster of cops inside patrol cars parked outside the entrance, who regularly insist over megaphones that students “move along.”

Operation Impact Schools has been widely celebrated as a success. On the first day of school this year, Police Commissioner Ray Kelly declared that crime in Impact Schools in the past year had dropped 10 percent, while felonies dropped 48 percent. Kelly revealed that an additional 30 schools will get the same kind of police attention applied to the original Impact Schools, and that the number of police assigned to targeted schools will increase from 150 to 200.

Deputy Commissioner of the NYPD, Paul Browne, applauds this approach to school safety. “Generally speaking, people are relieved to see more police in the schools and are glad to see something is happening to deal with discipline problems that disrupt their kids’ education,” said Browne.

Jim Baumann, Director of the Safety Division at the United Federation of Teachers, is also an advocate of Impact. “We like the approach of Operation Impact, though there are always devils in the details. We’re hopeful that the city is on the right track.”

But despite support from law enforcement, the mayor’s office and school administration, some worry focusing attention and funds on security obscures the underlying problems in city schools.

“By approaching solutions to the problems in public schools through a criminal lens instead of a social and economic lens, young people are being denied their basic rights. The real problems in these schools are poverty and underfunding. Discipline problems are a symptom of that,” says Raybblin Vargas of the Prison Moratorium Project and Teach Us Don’t Cuff Us.

Problems at many of the Impact Schools extend beyond disciplinary issues. Only 27 percent of students at Lane are expected to graduate on time, only 11 percent of entering ninth graders can read at an appropriate grade level and 89 percent of students qualify for free lunch. Disheartening statistics like this are representative of all of the Impact Schools, all of which serve predominately Black and Latino populations.

Santiago Taveras, a local instructional superintendent who has worked in New York City schools for almost two decades, feels that the Impact program approaches discipline from the wrong angle. “There are things these kids are going through that we can’t even begin to know. If some girl comes to school crying because there was a gang shooting last night, she should be met by counselors, not more police.”

Taveras believes that communication is central to discipline and that an alternative approach to discipline in violent schools would be to train alumni as counselors. “That way there could be a relationship between the kids and the people disciplining them. The kids would respect the counselors, and the counselors would know where they’re coming from.”

According to the National Center for Education Statistics, spending on counseling and other student support services in New York is only a third of that of other urban school districts. Only about 300 counselors serve all of the city’s public high schools, said Taveras.

The people most affected by Operation Impact, of course, are the students. “They don’t put up with stuff any more, there are no cell phones allowed, no glass bottles, now when you get in trouble they grab you, put you in a room, and deal with you,” says Jacqueline, a sophomore at Lane.

A New York Times article published the week of Operation Impact’s implementation reported six arrests on the first day of the program. At Franklin K. Lane, two students were arrested when they “got out of control” and became “aggressive” with security agents who asked them for I.D.

According to the mayor’s office, formerly chaotic hallways have begun to be brought under control. The office cited Franklin K. Lane as an example.

But Jasmine, also a sophomore at Lane, says that despite the increased police presence, things seem the same. “Kids still cut class all the time and don’t respect the teachers. I’ve been put in detention more, like three times last year, always for not having my I.D. in the halls.”

Raybblin Vargas, too, remains unconvinced: “Numbers and statistics from a program like Impact only prove that they have put more cops in these kids’ lives, not that they’ve begun to address the real, fundamental problems in New York City schools.”