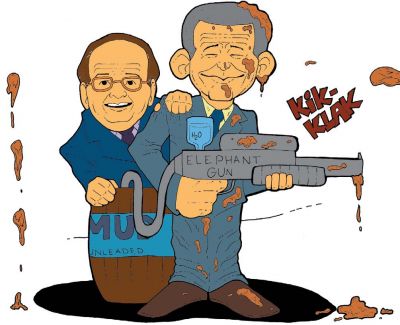 Now that Dan Rather and CBS News have admitted they were misled into reporting on forged documents about President Bush’s National Guard service, a thorough investigation into who leaked the memos to CBS is in order.

The dominant thinking seems to be that if the documents were forged, they were leaked in an effort to harm Bush. But it is worth considering another possibility: the Bush team itself may have “leaked” the forged documents. The whole affair seems to bear what is known as “The Mark of Rove,” as in Karl Rove, senior advisor to President Bush; Karl Rove the wizard of dirty tricks.

It is recognized that one of Bush’s greatest weaknesses in the presidential campaign is Vietnam. While John Kerry fought in the war and earned three Purple Hearts, a young George W. Bush enlisted in the Texas National Guard with help, it turns out, from Ben Barnes, then speaker of the Texas House. Barnes, of course, was a central figure in the 60 Minutes story, as he admitted for the first time to the media to intervening to get Bush into the Guard and keep him out of Vietnam.

As investigations by the Boston Globe and others have uncovered, Bush’s military record was shoddy at best, criminal at worst. He may be the first president who could have been tried for going AWOL. To counter Kerry’s “war hero” image, Bush supporters have launched an attack on Kerry’s record in Vietnam, questioning his account of his service. They have also portrayed him as having betrayed veterans when he spoke out against the war in his 1971 testimony before the Senate Foreign Relations Committee.

If Rove is behind the leaking of the allegedly forged documents shown on 60 Minutes, it could well be phase two of a strategy to kill all criticism of our Commander in Chief’s Vietnam War era record.

If you think this sounds like a nutty conspiracy theory, you probably haven’t been following Karl Rove’s career; a career replete with dirty tricks and sophisticated, pre-emptive political strikes.

Remember the allegations that Bush was arrested in 1972 on drug-possession charges, specifically cocaine? Today it is basically a non-story. But it is worth looking back at why.

In 1999, St. Martin’s Press published a critical biography of Bush titled Fortunate Son. The book quoted an unnamed “high-ranking advisor to Bush” who revealed Bush’s 1972 drug bust. The source told author J.H. Hatfield that Bush “was ordered by a Texas judge to perform community service in exchange for expunging his record showing illicit drug use.”

Hatfield later said that his source was none other than Karl Rove. That might seem ridiculous, considering Rove’s lifelong loyalty to the Bushes and the fact that he now has an office adjacent to Bush’s in the White House. But leaking the story to Hatfield essentially discredited the story and sent it into the realm of conspiracy theory. Soon after the book was published and just as St. Martin’s was preparing a high-profile launching of the book, the Dallas Morning News ran a story revealing that Hatfield was a felon who had served time in jail. In response, St. Martin’s pulled the book.

“When the media stumbled upon a story regarding George W. Bush’s 1972 cocaine-possession arrest, Rove had to find a way to kill the story. He did so by destroying the messenger,” says Sander Hicks, the former publisher of Soft Skull, which stepped in to publish Fortunate Son. “They knew the stories of Bush’s cocaine and drink busts would come out, so they made certain that it would come out of the mouth of a guy they could smear,” said journalist Greg Palast, who wrote the forward to the book.

If Rove was Hatfield’s source, he certainly wasn’t trying to expose Bush’s drug use. Instead he was trying to discredit and ultimately kill the story. And it worked. Few reporters since have dared to touch it.

In 1986, Moore and Slater report, Rove told reporters that someone had bugged the office where he was campaign manager for Texas gubernatorial candidate Bill Clements. On the morning of a major debate, Rove called a press conference. He said, “Obviously I don’t know who did this. But there is no doubt in my mind that the only ones who would benefit from this detailed, sensitive information would be the political opposition.” The press quickly assumed the bugging was done by Clements’ opponent, Mark White, who was leading in the polls. On election day, Rove’s candidate won and the source of the bug was never found – but many reporters later concluded that Rove himself had placed it.

Four years ago during the Bush-Gore race, the Gore camp mysteriously obtained sensitive campaign materials from the Bush campaign, including a video of the Texas governor prepping for a debate and detailed campaign strategy notes. Rove soon accused the Gore campaign of secretly taping Bush. Later a former employee of a Bush campaign advisor admitted to supplying the information to Gore.

In trademark fashion, Rove’s role in the case was never clear. He never leaves fingerprints behind. It is known as the “Mark of Rove.”

It may well have returned in the form of Times New Roman font on forged documents.