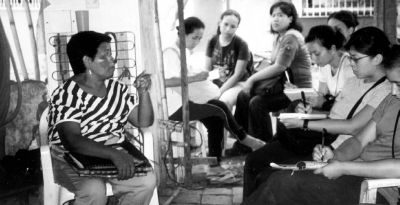 Nestled in the Western coast of the Philippine archipelago, south of Manila, the multibillion peso Batangas Port is currently in the second of its four phases of development.

Santa Clara, Phillipines – Hand-painted signs across from the project site read “NO TO PHASE II.” The signs were created by the people of Santa Clara, whose homes were demolished to clear space for the port’s construction. Ten years after demolition, they are still struggling to remain on their land, and intend to stay there and fight until they die.

With financing from the Japanese government, the development of the project took shape in the 1990s, early in the Fidel Ramos presidency. Ramos had envisioned a globally competitive Philippine economy. A new international port in Batangas would lessen traffic in Manila Bay and ease the transfer of domestic goods from the southern islands to the capital region. By 1994, the project was poised to begin in earnest – without the agreement of the 1,467 families living on the land.

Refusing to move, the people of Santa Clara created a warning signal: the striking of an empty container. On the morning of June 27, 1994, someone began to strike. The demolition of the community had begun. Hundreds of uniformed Philippine National Police officers and private contractors used tear gas and fired guns in the air. Some residents linked arms and resisted, while others threw stones. One resident was shot and others were hospitalized. Several contractors and policemen were also injured.

Some residents decided to move to the two temporary relocation sites offered by the government after demolition, but more than 400 families decided to stay. Many had been on the land for a century, working as fisherfolk, vendors or porters. They now occupy land the size of a baseball field, adjacent to a government project many times that size.

I arrived in Santa Clara in the late afternoon, after having spent hours traveling there in a jeepney – a refurbished American World War II vehicle now used as public transportation. I had traveled via a dirt road that Santa Clarans had cleared through marshland. The road will be turned into an access road for the port in exchange for electricity and a water system in the community.

My host, Irene Peña, welcomes me into her home, a simple structure of one room with an attached bamboo kitchen and an open-air porch. Irene is a former local official and the keeper of the Santa Clarans’ recent documented history. She keeps a photo album of the demolition and a tome of legal papers from the battle the community fought to maintain their property.

Santa Clarans take pride in having won recognition as legal residents. Their struggle now is for livelihood. During construction of the port, Congress passed several laws favoring privatization. Contracts were given to skilled workers, and employment in the community plummeted. Women turned to sex work, which increased with the presence of prostitution rings, and as Irene explained, people began selling drugs in order to survive.

According to a report issued by Ateneo de Manila University assessing the demolition and relocation, 87 percent of respondents in the Balete relocation site and 96 percent in the Sico site said they had less employment opportunities than they did before relocation.

“Aggression during WWII, according to our parents, was so grave,” Irene says. “But for the second time, another war of invasion has come to Santa Clara.”

Elected captain of the barangay (the equivalent of a town), Irene was ousted by a top-down campaign led by the Philippines Port Authority, ostensibly because of her militant opposition to the port, as well her ability to mobilize residents.

As night falls, her home transforms into a community center. A young man plays guitar on her porch. A group of teenagers and children begin to sing, while the older women of the community prepare dinner.

One of my travel companions asks Irene how the community is coping. With two more phases of development pending, another demolition is possible. “Nothing will free us,” Irene responds. “Nobody can free us, but only our strength could free us, and determination. The strength and determination to fight to the last drop of our blood is the only salvation.”