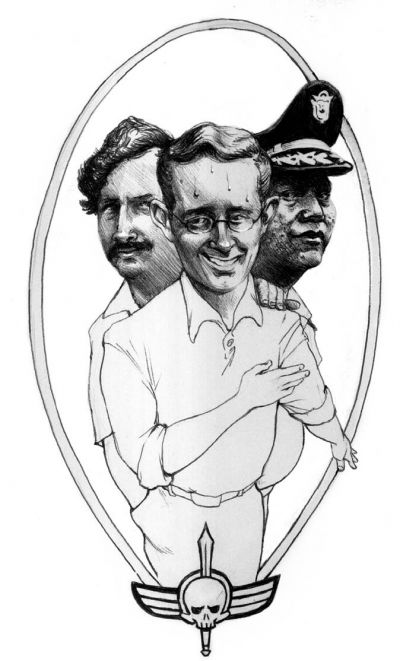 The emergence of a 1991 report from the U.S. Defense Intelligence Agency (DIA) naming current Colombian President Alvaro Uribe as a high-level operative of the notorious Medellín cartel has been an embarrassment for both the United States and its top South American ally. Meanwhile, rights groups in Colombia claim that atrocities have doubled under Uribe’s rule and the antimilitarist movement has again been targeted for attack.

The Sept. 23, 1991, DIA report was released under the Freedom of Information Act to a D.C.-based research group, the National Security Archives. The report asserts that Uribe, then a senator from the department of Antioquía, was “dedicated to collaboration with the Medellín cartel at high government levels.” It named him as a “close personal friend” of cartel kingpin Pablo Escobar, and claimed he helped Escobar secure his seat as an auxiliary congressman.

An Uribe spokesman dismissed the report as preliminary, saying that Uribe was studying at Harvard in 1991. Rob Zimmerman, a spokesman for the U.S. State Department, told the New York Times: “We completely disavow these allegations about President Uribe. We have no credible information that substantiates or corroborates the allegations in an unevaluated 1991 report.”

But the National Security Archives’ Michael Evans said: “We now know that the DIA… had information indicating that Alvaro Uribe was one of Colombia’s top drug-trafficking figures.”

Washington portrays Uribe as a key ally in the war on drugs and terrorism, boasting that his administration has extradited 150 accused traffickers to the U.S., more than twice the number extradited in his predecessor’s four-year term. But there have been persistent claims that as chief of Colombia’s civil aviation authority in the late 1980s, Uribe protected drug flights.

In an interview with the independent Colombian press agency, Anncol, Mendez said: “Since the start of the present administration human-rights violations in [the northeastern region of] Arauca have risen about 100 percent. The primary victims have been the social movements, who at the moment have more than 10
leaders jailed, primarily those with a record of uncompromising and dedicated protest against human-rights violations, and of promoting a model of alternative development…”

Para Bosses Address Congress
Meanwhile, Uribe’s so-called “peace dialogue” with the right-wing paramilitaries continues – which critics see as a means of legitimizing the terror network and bringing it under closer government control. On July 28, Salvatore Mancuso, now de facto leader of the United Self-Defense Forces of Colombia (AUC), spoke before Colombia’s congress along with his fellow warlords Ramon Isaza and Ivan Roberto Duque. The leaders of the
20,000-strong AUC had been given safe conduct to travel to Bogotá from the “safe haven” the paramilitary network was granted in the north of the country as a condition of the talks. Mancuso said the paramilitary leaders should not be imprisoned, but should be honored for saving Colombia from becoming “another Cuba.”

Uribe is proposing that AUC leaders be “confined” for five to ten years, but not necessarily in prison, as a compromise measure. This possibility was not raised in prospective talks with the leftist National Liberation Army, whose imprisoned leader Francisco Galán addressed Colombia’s congress in June.

Peace Community Under Attack
While the paramilitaries claim to oppose leftist guerrillas, Colombia’s antimilitarist movement has recently been targeted for attack. On July 29, the home of a leading member of Red Juvenil, an antiwar group in Medellín, was visited by two armed men who first said they were from the AUC, and later claimed to be from the Administrative Security Department, a government enforcement agency. The Red Juvenil activist was out at the time, but her mother was at home with a two-month-old baby. The mother was menaced with pistols, tied up and locked in the bathroom as the men searched the house.

New threats and violence are also reported from the Antioquía village of San José de Apartado, a self-proclaimed “peace community” which has declared its non-cooperation with all armed groups. On Aug. 11, a home in San José was torn by an explosion which left two women dead and two others injured, including the ten-year-old son of one of the women. The community’s statement on the incident said the explosion was caused by a grenade left behind by the army months earlier during fighting with guerrillas of the Revolutionary Armed Forces of Columbia in a banana field in the hamlet of La Union.

The statement also said that members of the peace community have been verbally threatened by paramilitaries in recent weeks, and that the road linking the village to the nearest town, Apartado, has become increasingly dangerous. On July 30, a local merchant who sold water in San José was killed by paramilitaries on the road. On Aug. 2, paramilitaries told San José residents in the Apartado bus terminal that they would launch another blockade of the community and kill the community’s leaders.

The statement closed with an expression of determination in the face of the threats and violence: “We again reiterate our commitment to continue building paths of dignity in the midst of the war.”