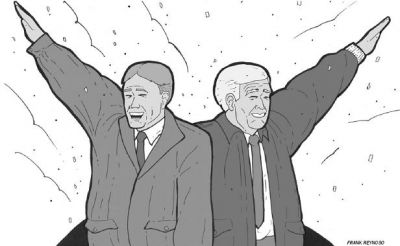 The Plot Against America by Philip Roth
Houghton Mifflin (2004)

“If fascism came to America, it would be on a program of Americanism,” said Sen. Huey Long, Lousiana’s populist caudillo, in 1935. Writer Sinclair Lewis took on that theme in his 1935 novel It Can’t Happen Here (to be rereleased in February by Signet Classics), in which a folksy-talking fascist named Berzelius Windrip twists the presidency into dictatorship, with the enthusiastic support of the religious right and Americans longing for a strongman. And nearly 70 years later, as the specter of George W. Bush haunts America, Philip Roth’s The Plot Against America echoes it, imagining what could have happened if anti-Semitic aviation hero Charles A. Lindbergh had unseated Franklin D. Roosevelt in the 1940 election.

The Plot Against America also echoes Lewis’s book in its structure, the onrush of totalitarianism as seen by someone in a small corner of America. Lewis’s epigone is Doremus Jessup, a sixtyish liberal small-town newspaper editor in Vermont; Roth’s is an 8-year-old Jewish boy – named “Philip Roth”– from the outskirts of Newark.

Both start in domestic tranquility, the characters reluctant to believe the omens of repression – “it can’t happen here – “until they get personally splattered.” (Roth’s ghettobred Jews are more paranoid, but still have a deep faith in America.) And in both books, the personal mixes with the public, with media and samizdat vignettes of historical happenings and lists of contemporary political and media figures.

Some of this may be incomprehensible to readers who have no idea who Walter Winchell was (a legendary gossip columnist who becomes an anti-Nazi hero in Roth’s book), let alone Father Charles Coughlin (a Jew-baiting radio priest).

It Can’t Happen Here is a modern classic, both as a prophetic jeremiad and as satire. “The one thing that most perplexed him is that there could be a dictator seemingly so different from the fervent Hitlers and gesticulating Fascists… a dictator with something of the earthy American sense of humor,” Lewis muses. “Windrip could be ever so funny about solemn jaw-drooping opponents, and about the best method of training what he called ‘a Siamese flea hound.’ Did that, puzzled Doremus, make him more or less dangerous?” Do I need to say who that sounds like? As for Roth’s Lindbergh, he’s no Texas golfcourse cowboy; he flies solo to campaign events, where he offers laconic platitudes. “Lindy flew down out of the sky in his famous plane, and it was 1927 all over again… fearless Lindy, at once youthful and gravely mature, the rugged individualist, the legendary American man’s man who gets the impossible done by relying solely on himself.”

The 1930s are usually thought of as a liberal decade in America, the era of labor-union victories and the New Deal, but there was also a strong fascist movement. The German-American Bund staged rallies supporting Adolf Hitler, and the Ku Klux Klan had only recently ebbed down from millions of supporters. Anti-Semitism was also much more prevalent: Wall Street and medical schools discriminated against Jews, Henry Ford shipped reprints of the Protocols of the Elders of Zion to car dealers, and Irish-Catholic youths in Boston and the Bronx beat up Jewish schoolboys, shouting “Christ-killer!” Today, overt Jew-hating is largely confined to a small segment of blacknationalist Muslims and white supremacists. More covert Jew-hating emanates from the kind of leftists who post screeds about “Zionazis” on Indymedia.org, and a significant faction of the Christian right, which, though zealously Zionist, “supports Israel” because it believes that the Jews regaining control of the Biblical lands is an essential prelude to the second coming of Jesus – at which point all the unconverted Hebrews will be cast into the lake of fire for eternity.

Yet it’s not difficult to update the metaphors of ethnic politics. Roth’s teenage cousin Alvin, who swings from juvenile delinquent to militant and back, denounces Newark’s leading rabbi for “koshering Lindbergh for the goyim” – much as Condoleezza Rice, Colin Powell and Clarence Thomas didn’t win many black votes for Bush, but they did reassure whites that they weren’t voting for a racist.

Meanwhile, Roth’s assimilationist older brother and aunt dismiss the family’s reluctance to accept collaboration and forced relocation as the narrow-minded timorousness of “ghetto Jews.” And the religionbased hate of 1930s anti-Semitism has simply switched its focus to gays and lesbians.

Roth’s language is much plainer than the hyperbolic comic spiel of Portnoy’s Complaint, but it has enough ruminative depth to make the story engrossing. Still, it feels a little thin at times. The female characters are underdeveloped, a mother and a ditsy bimbo –granted, it is written from the point of view of a young boy in 1940. And Roth’s artful weaving of public and private lives splits at the end, as the final events are colossally telescoped, revealing the Lindbergh administration’s fate a full chapter before that of the Roth family. It was riveting enough to read in one sitting, but left me wanting more.