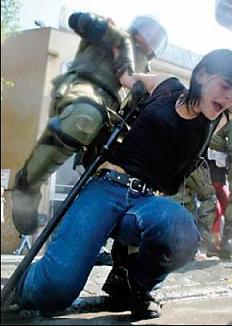 Protesters opposed to U.S. President George W. Bush, the war in Iraq and corporate globalization marched through the streets and clashed with police to protest the annual Asian-Pacific Economic Cooperation (APEC) summit and the visit of President Bush, which took place in Santiago, Chile from Nov. 20-21.

On the eve of the APEC summit on Nov. 19, 25,000 to 40,000 protesters took to the streets in Santiago, Chile’s capital, and Valparaiso, Chile’s second biggest city. Some left-wing and anarchist groups led smaller street protests of their own all week. Protesters threw Molotov cocktails and stones, burned U.S. flags, attacked a McDonald’s and offices of the Spanish phone company Telefonica. They ransacked the lobby of the fourstar Prince of Asturias Hotel, breaking windows and dragging furniture into the street.

The demonstrators were met with water cannons and tear gas fired from the police’s armored vehicles, ending the riots abruptly. On Nov. 23, the BBC reported more than 700 people had been arrested during the protests.

“We want Bush to know he is not welcome here,” said Monica Cerón, a college student. “Our government may want to do business with him, but the Chilean people oppose his genocidal war on Iraq and his designs on Latin America.”

APEC’s 21 members represent 55 percent of world trade and 57 percent of global GDP. Together, they are home to 40 percent of the world’s population – roughly 2.5 billion people. However, the APEC summit is defined as a meeting of economies, not countries.

A longer version of this story originally appeared in the Asheville Global Report (agrnews.org).

A longer version of this story originally appeared in the Asheville Global Report (agrnews.org).