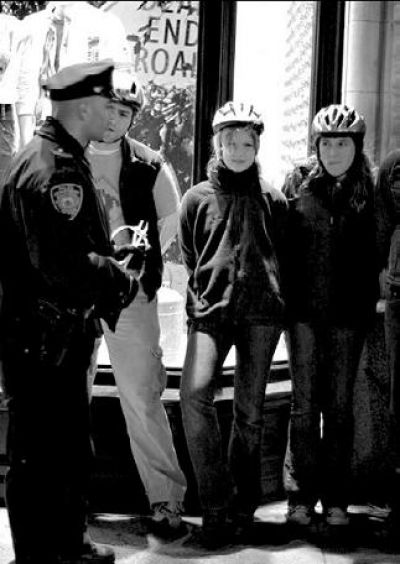 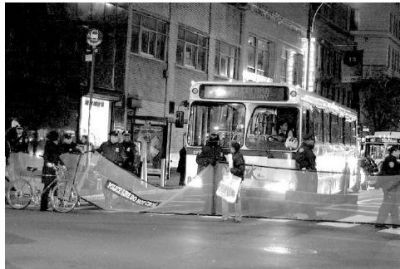 The 500 or so bicyclists who converged on Union Square for the Nov. 26 Critical Mass had probably become resigned to the presence of the NYPD at their monthly event. The August Critical Mass, which drew over 5,000 people three days before the start of the Republican National Convention, resulted in over 250 arrests. This marked the beginning of a period of intense police harassment of the ride, which had previously gone on unmolested for years. In September, nine participants were arrested and 40 bikes were seized, while October saw 35 arrests.

Little could have prepared the Critical Mass riders for what awaited them in November, however. According to reports on the New York City Indymedia website, “the NYPD had over 50 police vans, 40 scooters, 600 bike cops, dozens of police cars, 20 flatbed trucks, 7 mobile police station and camera vans, and two helicopters” in Union Square on Nov. 26. Seventeen people were arrested over the course of the night, which saw the ride dispersed into small groups across Manhattan.

The attack on Critical Mass appears to be the latest round in a decade-long battle waged by the City of New York against “unpermitted activities” of all kinds, beginning with Rudy Giuliani. According to statements

from the Bloomberg Administration, the City’s primary problem with Critical Mass seems less that it exists than that it occurs without leaders, central organizers or parade route permits.

Perhaps ominously, the fate of Critical Mass in its present form rests, at least in part, with the local courts. “A federal judge has given the cyclists until Nov. 30 to respond [to the city’s call for a permit],” the Associated Press noted on Nov. 29. “Then the city has until Dec. 6 to counter their reply. A hearing has been scheduled for Dec. 8.”

Many New York City Indymedia readers have offered suggestions for how Critical Mass can both continue and effectively counter ever-increasing police harassment. Some of their thoughts include:

“We need to take control of the debate … We want a safer, more cycle-friendly city. We want motorists to stop killing cyclists and pedestrians. Besides fighting in court and keeping up the rides we each can do our bit to promote critical mass by writing letters in response to the reports in the corporate media, which seem to be turning against us.” —BND

“Someday, in the near future, there will be another terrorist attack in NYC. After-the fact, the NYPD will deliver feeble excuses – they “didn’t have a clue about the planning and preparations of the attackers.” They were spending time and money monitoring and chasing a group of bicyclists! Sending helicopters up for hours to watch bicyclists! Way to go NYPD brass! What a bunch of over-paid, under-worked morons.” —Pedal Power

“I don’t think going through the courts is going to do anything. What’s the point when Bloomberg calls the shots now and the NYPD obeys like a pack of Nazis? If freedom means being a criminal, then count me in.” —b

“The fact that the founder and head of one of the world’s largest companies, and mayor of what used to be one of the world’s most enlightened cities, has only been able to simple resort to such expensive andcounter productive bullying tactics demonstrates his inability to grasp such a simple and evident expression of human rationality and dignity. It is wonderful that a bunch of “kids on bikes” have demonstrated a superior capacity to match wits with one of the worlds largest bureaucracies and overpaid appendages.” —Gustavo

“Above all we need to remind ourselves that we are on the winning side of this battle. Cities will become greener as a matter of necessity. It’s inevitable. And petty tyrants like Bloomberg and Kelly are already dinosaurs. They’ve got a lot of resources to fart around with at the moment but they’re history and they know it.”—Ghost of the green future 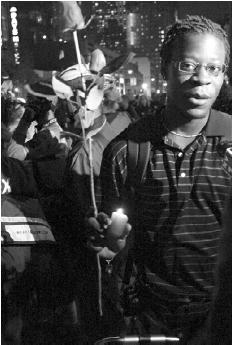 Mahmadoo Daffee attends a vigil on Friday Nov. 19 for a fellow bike messenger who was killed the day before at 8th Ave. and 49th St. in Manhattan. PHOTO: CAITLIN BENEDETTO