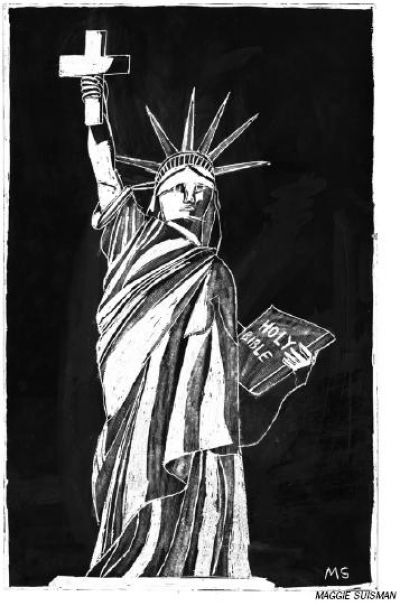 Millions of middle and lower-class “values” voters set aside their own self-interest in this last election to vote George W. Bush back into the White House. If the displacement of politics by morality is a sign of a certain kind of boldness, as the Bush campaign never tired of telling voters, it also signals an anxiety that runs much deeper than a fear of homosexuality or a woman’s control over her own body or fear of the next terrorist strike.

What demands analysis is not the content of Bush’s moral vision or how his chief political strategist Karl Rove articulated it, but rather: Why moral vision has come to replace political principles for a substantial number of American voters.

While not for the impatient reader, J.G.A. Pocock’s monumental study of the evolution of republican government, The Machiavellian Moment, provides a richly instructive background with which to understand America’s turn to God’s Republic.

To Pocock, the history of republican government is found in the quarrel between ancient liberty, which emphasizes the positive development of moral character (something that preoccupies many of Bush’s evangelical supporters), and modern liberty which is a contract guaranteeing citizens freedom from unreasonable restraints: Freedom from being done unto, freedom from search and seizure, freedom from being enslaved and freedom of speech and assembly. With Bush’s return to office, it is tempting to conclude that this highly generative dialogue has ceased.

Pocock, however, describes modern American consciousness of politics slightly less pessimistically: “It may very well be that we ourselves have reached a condition where the knowledge of fictiveness [of politics and society] is unsatisfying to the point of being intolerable; in doubting whether the oligarchy of politicians who oblige us to choose between them represent us in anyway worth speaking of, we doubt whether we have selves left to represent.” For example, many Clinton supporters felt not politically but morally misrepresented by the Lewinsky affair – as if they themselves had to atone personally for his adultery and dishonesty by electing Bush. Gore lost for moral not political reasons.

Yet, many more voters have also begun to feel they do not have a moral self capable of being represented politically. A turbo-capitalistic, hyper-mediated postmodern world blares away that the self, politics and society are mere fictions that can be bought and sold along with anything else in a global economy. The suspicion that one’s identity is as fictional as politics induces tremendous cognitive dissonance in any intelligent person. Awareness of the fictiveness of a post-modern world erodes the unity of personality necessary to act in history. Even the simple act of voting feels pointless or absurd. Many check out of politics altogether.

Other, more idealistic individuals respond to the fictiveness of self and politics by resuscitating the classical political ideal of the active citizen, who develops his/her moral virtue and unifies his/her personality through strenuous participation in the republic. The ancient ideal of the vivere civile (civic humanism) drives many members of the Global Justice Movement as relentlessly as it does Bush supporters. Members of both groups want to be participatory citizens; they want politics to be the place where they can keep their personal virtue striated and well-toned – safe from the corruptions of the (post)modern world. The genius of Rove’s rhetoric resides in how it used a lucid, articulate, ultimately empty moral vision to make once-alienated middle and lower-class voters feel like active citizens. The Oval Office wasn’t turned into a church so much as churches were turned into oval offices. For true believers, a republican government is an exercise machine on which citizens keep themselves morally fit.