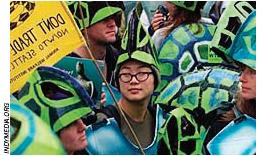 Anti-WTO protesters take to the streets in Seattle …

When Czechoslovakia’s dissident playwright Vaclav Havel wrote in 1986, “hope is not prognostication. It is an orientation of the spirit, an orientation of the heart,” he might have had someone like David Solnit in mind. A pioneering puppetista and a key organizer of the anti-WTO protests in Seattle five years ago that electrified tens of millions of people around the world, Solnit has been plugging away for the past two decades in a wide array of grassroots peace, justice and environmental campaigns. During that time, he has been a tireless advocate of building “directly democratic” movements that see radical social change not as a fixed destination but as an ongoing process.

Now, he has produced Globalize Liberation, a collection of 33 essays from thinkers and activists embedded in the new radicalism that burst into the public consciousness in Seattle. Written to stimulate discussion and reflection among activists, the book analyzes the problems posed by global capitalism, meditates on how to confront it and looks at a dozen case histories of ideas being put into action by groups as diverse as migrant farm workers in southern Florida, the disobedientes of Italy and neighborhood assemblies in Argentina.

The book’s tone is urgent yet relentlessly hopeful and encourages readers to push open new spheres of collective self-empowerment. Upon putting it down, you will want to join up with others and do something. As the incurably optimistic Solnit writes in the introduction, “All we have to do is change everything.” However, the book’s range of vision is at times highly selective. A number of writers (Naomi Klein, Elizabeth “Betita” Martinez, John Jordan, etc.) celebrate the Zapatistas, whose 1994 rebellion in Mexico’s southern province of Chiapas is widely considered by activists to be the beginning of the new radicalism. History’s first post-modern guerrilla movement, the Zapatistas eschewed seizing state power, spoke in enigmatic riddles instead of ideological certainty and called for “a world that fits many worlds” instead of a one-size-fits-all model of change. In a world both more interconnected and fragmented by the forces of globalization, the Zapatistas have inspired activists with their vision of a decentralized yet interlinking movement of movements waging local battles for autonomy and community empowerment.

But, the Zapatistas are no closer to achieving their stated goals than when they began. If anything, their movement is slowly disintegrating due to internal fissures as well as the relentless pressure of the Mexican government’s beneath-theradar counterinsurgency. Meanwhile, the neo-liberal restructuring of the country continues on under a president who is a former Coca-Cola executive.

In recent years, the leading edge of the global justice movement has shifted to South America. The different experiences of social movements in Argentina (autonomous and decentralized) and Venezuela (aligned with the elected leftist government of Hugo Chavez) may offer unique insights into the question of whether it is wiser to wield state power or to try and dissolve it. The book, however, does not tackle the issue. For many younger leftists in the United States, small affinity groups, consensus process and an aversion to organizational structure have been mainstays since Seattle. It’s time to look more closely at what is working and what’s not. For example:

• Is the new radicalism’s squeamishness about power and money ultimately counter-productive, i.e., does it make it impossible to build lasting counter-institutions?

• How useful is consensus process, where everyone in a group has to agree for a decision to be made? Consensus at its best allows each voice to be heard and teaches good listening skills. On the other hand, it tends to consume more time and produce more acrimony than any other form of decision making and can still end up being dominated by “informal” leaders.

• Do people want to live in a direct democracy? Going to meetings all the time is tiring. A minority of people will make the sacrifice when there’s a sense of urgency or expectation (like before a large protest). How many are ready to make it a way of life?

As someone who has worked on The Indypendent for the past three and a half years and moved through various counter-cultural milieus for a decade prior to that, these are some of the big questions I often find myself bumping up against as our collective tries to balance the new radicalism’s utopian ideals with a certain measure of real-world pragmatism. The process of reflection that begins in Globalize Liberation needs to be expanded. Meanwhile, in dark times such as these, we are fortunate to have in our midst a resourceful dreamer like David Solnit, who never fails to see a brighter day ahead. 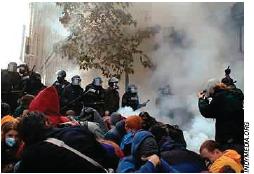 …and the police respond.