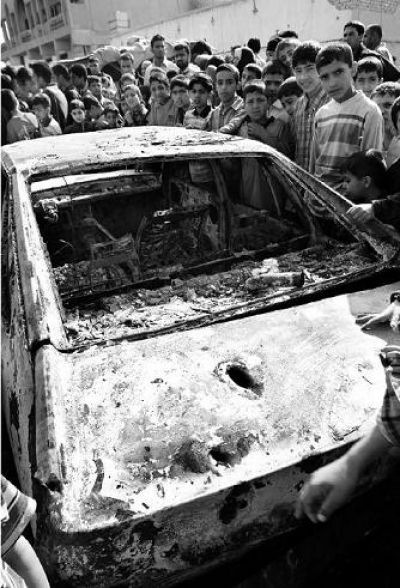 April 7, 2004 – A car whose driver was burned alive after being hit by a U.S. missile in the Sad’r City section of Baghdad. ©ANDREW STERN/ANDREWSTERN.NET

BAGHDAD, Nov. 19—We had our daily car bomb today when a suicide bomber drove his car into a U.S. patrol as it passed near the Yarmouk police station. Several Iraqis were killed, with no report yet on U.S. casualties. I felt the rumble even though I was on a street far away from the blast – at least five miles distant.

Walking and driving on the streets of Baghdad, I find myself in a sea of chaos. Traffic is mayhem for many reasons, the current fuel crisis being the lead cause. Lines at petrol stations stretch for miles at some of the stations. A common scene at these lines is that of people pushing their cars because they are already out of gas, or to save what precious little may be left in their tank.

The fuel lines that stretch in the busier parts of the city cause huge snarls of traffic as it is squeezed into one of the remaining lanes left open.

Another reason is military patrols and searches. Oftentimes when we are caught in crawling traffic, we come upon several Humvees blocking one of the lanes as they are searching a store or guarding troops who are doing a small foot patrol.

Iraqi reaction to military vehicles in the city continues to be cold. Actually, more than cold – it has become notably hostile.

I was walking with my interpreter along one of the main streets of Baghdad when a couple of different times patrols of twin Humvees rolled by with guns pointing out the windows at people, and the machine gunners atop them swinging their guns back and forth at the rooftops of buildings. Each time men nearby said to nobody in particular, “Get off our streets with your guns,” “You aren’t here to protect us you bastards,” or as one man laughed to his friend, “Can’t you see we have no weapons of mass destruction? Now go home!”

A little later, a group of two white SUVs full of (I presume) CIA and/or mercenaries followed by a GMC with several large antennae rolled down the road with their guns pointing out the tinted windows at pedestrians. As the GMC passed, the back was open because inside was literally a machine gun bunker – a black metal shield covered the opening, with a small rectangle on the top portion that had the barrel of a large caliber machine gun hanging out of it.

I noted several Iraqis around me shaking their heads as they watched this entourage pass. Several blocks away, several large explosions are heard in the general area from which they’d come.

Later this evening, a friend stopped by my room to visit. He is a Christian man who had hoped that the attack on Fallujah would have quieted the resistance.

But he is sickened by the U.S.-installed interim government, and the utter futility of fixing anything in his war-torn occupied country.

He said, “The government only cares about themselves. They are obviously not here to help Iraq. It is such a simple thing to fix a hole in the street, you can just bring asphalt and fill it with a shovel. They cannot even do this. You can see the city is rubbish… so how can they fix the big problems like the fighting? Falluja is now a disaster, and the resistance is everywhere around Iraq. They can do nothing because they are powerless. There is no army or police here worth anything. This is worse than the war in Lebanon. There is no solution.”