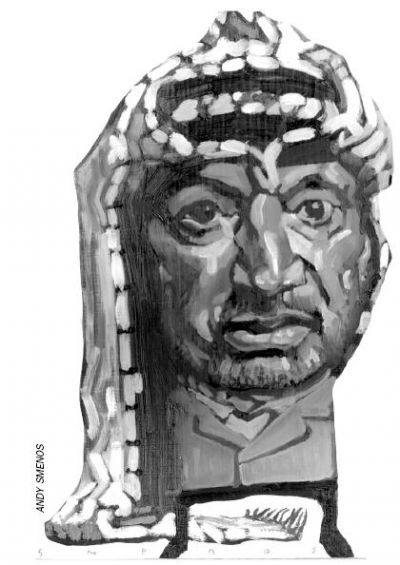 If the Palestine Liberation Organization and the Palestinian Authority (PA) can transform themselves to take on this role, they deserve the support of every Palestinian. If, however, they plan to continue as they have before, they must dissolve.  As constituted by the Oslo accords, the Palestinian Authority harms Palestinian interests, because it obscures Israel’s responsibility as the occupying power without providing any minimal protection for the people in opposition to Israel’s continuous onslaught. Its existence has allowed the spurious agenda of “reform” to trump Israel’s obligations under the Geneva Conventions and U.N. resolutions. Palestinian leaders should no longer accept the responsibility for governing Palestinians on behalf of the occupying power. Israel should bear the full cost of its choices.

Yet the conventional wisdom says that Yasir Arafat’s death provides an opportunity to revive the Palestinian-Israeli peace process. Realities such as Israel’s refusal in word and deed to withdraw and allow the establishment of a genuine Palestinian state in the occupied territories have simply been ignored. Dov Weissglas, the most senior advisor to Israeli premier Ariel Sharon, explained in early October that Israel’s Gaza “disengagement” plan, which has been embraced by the bankrupt international peace process industry, is actually a ruse to kill – not advance – any peace process. Weissglas said, “when you freeze that [peace] process, you prevent the establishment of a Palestinian state, and you prevent a discussion on the refugees, the borders and Jerusalem. Effectively, this whole package called the Palestinian state, with all that it entails, has been removed indefinitely from our agenda.”

Logically, therefore, any “opportunity” for peace through the establishment of a Palestinian state depends either on a clear change of Israeli policy or a clear willingness by the United States and the international community to force Israel to change its policy. So far, the only policy announcement to come from Israel is that it plans a posthumous “anti-Arafat crusade” in the media.

President Bush has already shattered hopes that in a second term, freed from re-election concerns, he might pressure Israel. At his November 12 press conference with U.K. prime minister Tony Blair, Bush was asked if Israel should at last implement a freeze on West Bank settlement expansion. He side-stepped the question, placing the entire burden on the Palestinians: “I believe that the responsibility for peace is going to rest with the Palestinian people’s desire to build a democracy and Israel’s willingness to help them build a democracy.” Bush also stated that peace “can be reached by only one path, the path of democracy, reform and the rule of law.” There is no sign yet that the E.U. or Arab states intend to challenge his approach.

Yet at the same time, Bush and Blair declared support for elections in the occupied territories – a position seemingly in tune with Palestinian aspirations. Indeed, the elections present both dangers and opportunities.

At a minimum, fair elections require international intervention to protect the Palestinians from the occupier and ensure all candidates have fair access to PA-controlled media and are free from intimidation whether by Israel or the PA. The danger is that snap elections in the West Bank and Gaza, under Israel’s crushing rule, will offer no fair opportunity for new Palestinian leaders with new strategies to emerge. Elections must provide a genuine contest and not be mere plebiscites confirming the post-Arafat appointments of failed old guard figures like PLO chairman Mahmoud Abbas and Prime Minister Ahmed Qureia and their backers who control the PA apparatus with money and guns. Ominously, The New York Times reports that Israel, under American pressure, has already released $40 million in blocked PA funds to “strengthen the position” of the old guard.

In the best case, from Israel’s perspective, the old guard confirmed in place by flawed elections would continue to offer disastrous concessions as they did throughout the Oslo period. And at worst, they would simply become new scapegoats to whom Israel and the U.S. will deliver impossible demands and then heap blame when they are inevitably unfulfilled. Palestinian leaders must no longer accept this assigned role.

Palestinians should also demand elections in the diaspora as well the occupied territories. Arguably Arafat’s greatest mistake is that after signing the Oslo accords, he abandoned the PLO’s base in exile. Millions of Palestinians were disenfranchised and the negotiating position of the Palestinian leadership severely weakened because it could not claim that it had to refer any agreement back to its people.

Assistance from the United Nations and host countries would be essential to successful diaspora elections. The recent Afghan election, in which 740,000 refugees in Pakistan voted, proves it can be done. Currently, almost four million Palestine refugees are registered with UNRWA. All exiled Palestinians should have the right to vote and be elected to a Palestinian national assembly with the sole authority to approve any future peace agreement.

This would be in the best interests of Palestinians because it would strengthen and hold accountable any eventual Palestinian negotiating body by ensuring it accepts no deal which compromises basic rights, particularly the rights of refugees. This is exactly why such elections would be strongly opposed by Israel, the United States, the E.U. and the Palestinian old guard.

But now is the time for Palestinians to set their own agenda, to build a new movement, and to see who among their self-declared allies really has their freedom, democracy and rights at heart.

Ali Abunimah is a co-founder of electronicintifada.org