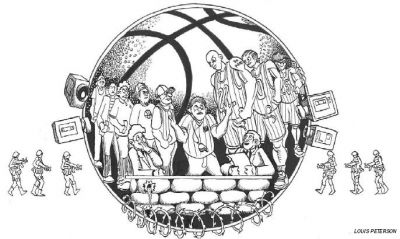 I don’t think we’ll be hearing the ‘NBA Action is Faaaantstic’ slogan revived anytime soon. The aftermath of the most violent player/fan brawl in U.S. sports history has met with the hand wringing we usually associate with Janet Jackson’s right breast. The fight between several members of the Indiana Pacers and a garrison of Detroit Pistons fans veered wildly from the frightening to the ridiculous.

Pacers forwards Ron Artest and Stephen Jackson swung haymakers at anyone with a potbelly and a Pistons jersey. There were their 5’9” 220 pound combatants throwing punches at Artest like he was Joey from the block and not a 6’8” pro athlete who could cave in their face. There was Rick Mahorn of all people – the tough guy of the 1980s Pistons teams, getting up from the broadcast booth and pulling people apart – like an ‘old timers brawl’ of sorts (I kept looking for Charles Oakley to emerge from the crowd and hit Mahorn with a folding chair.) And there was that moment when tragedy truly became farce: seeing Rasheed Wallace step in as ‘peace maker’.

As soon as Artest was pelted by a cup of ice, hurdled into the crowd and started throwing haymakers like Clubber Lang, you knew that NBA commissioner David Stern would bring down the hammer, and he did not disappoint. Artest, the reigning NBA defensive player of the year, received a 73 game suspension, the longest in NBA history. Also getting nailed with historic time away from the court were the Pacers’ Stephen Jackson who got a 30-game vacation, and all-NBA forward Jermaine O’Neal who was not only pegged with 25 games but also faces charges for cold cocking a fan off camera in full view of several Auburn Hills’ cops.

Whenever an event this out of the ordinary occurs, the sports establishment ever fearful of a black eye, treats it like a catastrophic epidemic and has already offered PR solutions ranging from banning beer sales to circling armed cops around the court (that is exactly what was needed amid the chaos – guns).

What this approach ignores, including logic, is the opportunity to confront a new phenomenon in U.S. sports: the simmering animosity between ticket holding (emphasis on ticket holding), fans and the players. Here, whether Stern and the NBA brass want to discuss it or not, we have a mulligan stew of race, class and grievance that says a great deal about the uneasy place of pro sports in U.S. society. First, as columnist Jason Whitlock commented after the brawl, “Many fans love the sport but just hate pro athletes.” Athletes in the eyes of many fans are too spoiled, too loud, too “hip-hop” too tattooed, too corn-rowed – all of which translates to players as “too black.”

Also in this era of fantasy leagues, yipping high testosterone sports radio, high-ticket prices and league sponsored EA sports video games that wallow in computerized bench clearing brawls, fans more than ever see themselves as participants rather than observers (the EA sports slogan actually is “get in the game”). Those fans in Detroit, $50 tickets in hand, believe they have more than the right – they have the duty to throw punches at opposing players if the opportunity presents itself. One striking scene from the Auburn Hills fight was when a man clearly on the gray side of forty, appears to be pulling at Artest to break up the fight, and then throws three straight rabbit punches to the back of the 6’8” forward’s head.

This man also happened to be white, which is the other side of the fan/athlete resentathon. NBA players, the overwhelming majority of whom come from poor inner city backgrounds, don’t look at the stands and think, “Hey! What a terrific group of 40-year-old white guys I’m going to be dunking for this evening!” As one player said to me, “I look at the seats and don’t see anyone from my old hood or anybody that looks anything like me. It’s like you’re a monkey in a cage.” So we have angry white fans trying to punch out angry black players with the players returning the favor. This animosity is very real and not going anywhere.

This violence is also heated by the bloodshed engulfing U.S. society – not street violence, but the state-sanctioned variety. ESPN has replayed the “horror” of the fight ad nauseum, in black and white, with all kinds of slow-motion angles. They have reveled in this fight and are crying all the way to the ratings bank. But as the “World Wide Leader” cries over the punches thrown, remember that this is also a network that did a week of Sports Centers in Kuwait, on a set made up to look like a machine gun nest. Ask people in Falluja what violence really looks like, and the role a network like ESPN plays in promoting the acceptance of such violence. An NBA player’s union rep gave some grounding perspective to the brawl, commenting that, “Yes it was violent. But there is violence everywhere. There is violence in war.” This is a thoughtful comment with at least a modicum of perspective. He will probably be fired.

This is excerpted from a longer article. See edgeofsport.com