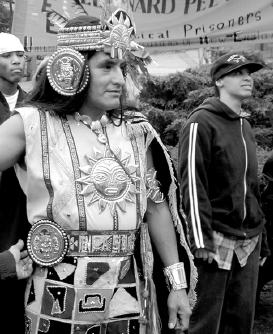 PLYMOUTH, Massachusetts—About 300 protesters gathered on Thanksgiving to commemorate the holiday’s forgotten history. Memories of massacres past and present lingered in the damp, late autumn breeze.

“Given what they did in Mystic, Sand Creek, Wounded Knee and so many other places, why would they hesitate to level a whole city?” Asked Mahtowin Munro, co-leader of the United American Indians of New England (UAINE). “Whether we’re talking about 1676 in New England, 1966 in Vietnam or 2004 in Iraq, these same American monsters are pursuing a path of death and destruction.”

“I pray every day that the war will end and that the U.S. will withdraw all its troops from Iraq and allow the Iraqis to go their own way,” added Moonanum James, co-leader of UAINE. “It’s called self-determination.”

A murmur of dismay rippled through the crowd when James announced that a new U.S. military offensive south of Baghdad had been named Operation Plymouth Rock.

Native Americans have marked a National Day of Mourning at Plymouth every year since 1970. That year, Moonanum’s father, Frank James, led a band of 500 warriors from the American Indian Movement, who took over a replica of the Mayflower and also shoveled dirt over Plymouth Rock where legend has it that the Pilgrims first set foot ashore.

“We didn’t land on Plymouth Rock. Plymouth Rock landed on us,” said Tall Oak, who also took part in the original 1970 action.

This year’s ceremony began on a hill overlooking Plymouth Harbor. Participants circled around a statue of Massasoit, the Wampanoag Indian sachem who welcomed the original Pilgrims in 1620. The smell of sage and sweet grass wafted through the air as a Native American elder prayed to the four directions. Nearby, a homemade banner told the story of Metacom, Massasoit’s son who was captured and beheaded in 1676 after leading a rebellion against English settlers. After listening to speeches (all of which were made by Native Americans), the crowd marched through downtown Plymouth to the sound of a lone drumbeat and then shared a common meal at the local Unitarian church.

The words of the Native Americans echoed with many non-native participants.

“When I hear the stories of these Indians, I can’t help but think of the Caribs and the Arawaks who inhabited Haiti before it became other things,” said a Boston woman whose parents emigrated from Haiti.

Arturo Perez Saad, a grad student at Pratt Institute, traveled from New York with a busload of activists organized by the International Action Center. He said he was immediately skeptical of the story of Plymouth Rock, which lies half-buried in sand under a temple-like edifice with the number “1620” etched on its top. He worried that myths spun in Plymouth can have serious consequences.

“Myth can start out telling a partial truth but with time it can be so twisted and skewed that it can turn into an obvious lie.”

Tony Pinckney, a railroad switchman from Haverhill, MA. said he first asked his parents “where are the Indians?” while celebrating Thanksgiving when he was six years old. For him, the march was a chance to apologize.

“We don’t celebrate slavery or the holocaust but we still celebrate Thanksgiving,” he said. “Why the hell are we celebrating something that went so terribly wrong?”