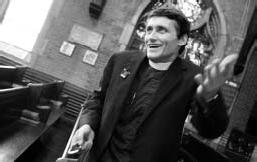 “Go. Scram. Get outta here,” he said, flicking his hand at the 30 or so congregants in the pews.

Actually, he was (very loosely) quoting Jesus Christ. Christ, Kooperkamp explained, was always telling people to “go.” To go spread his teachings. To go fight injustice. To go sit in church on Sunday, Kooperkamp said, was not enough.

St. Mary’s Episcopal Church, a gothic-style cathedral nestled among public housing complexes, delis and a police station, stands on 126th Street between Broadway and Amsterdam Ave. Founded in 1823, it is the second oldest church in Harlem, and it was the first “free pew” church; congregation members never had to pay to worship.

When Reverend Kooperkamp became pastor of St. Mary’s Church four and a half years ago, he knew he wanted to continue the tradition of community activism.

Shortly after the terrorist attacks of September 11, 2001, Kooperkamp hosted the founding meeting of Not in Our Name, a group that demonstrates against what he calls “the American war machine.” He also led the church to support the Peace Tax Fund Bill, which would allow conscientious objectors not to pay war tax. Congregants meet at St. Mary’s to fight against the death penalty, to preserve immigrants’ rights and to keep public housing in Harlem safe.

“It’s a base area for all kinds of social and political activity, all the way from Hillary Clinton coming here to meetings about revolution,” said Phil Farnham, 71, as he distributed fliers for the New York City chapter of the Revolutionary Communist Party, which meets at the church.

“The things that we move against at St. Mary’s are the imperial institutions,” said Kooperkamp. “I believe that the Christian religion is based on freedom.”

Kooperkamp, 48, lists among his major regrets in life never having seen the Clash play live. He is slight with brown hair and light blue eyes. While he’s preaching, he moves constantly.

According to Kooperkamp, approximately three-quarters of the 175-member congregation are African-American, and the remaining quarter are white and Hispanic. Some members are Columbia professors, and others are homeless.

But Kooperkamp said it wasn’t hard for members to find common ground.

“We have something in common, which is that we live in West Harlem,” he said.

The last traces of Kooperkamp’s drawl come out when he pronounces the name of the city where he grew up. “Low-ville,” he says for Louisville, Kentucky. He remembers going to church with his family during the Vietnam War; it was during that time that he realized that he wanted to be a pastor and that he didn’t want to fight in the war. After graduating from Hampshire College, he enrolled in Union Theological Seminary in Morningside Heights.

In the early 1980s while he was in seminary, Kooperkamp wasn’t sure he was in the right place. He had been listening to punk rock for a while, and he remembered the night he saw the Ramones live in an acoustically perfect auditorium as one of the highlights of his life. Sometimes, he looked around at his fellow seminarians and suspected he might not fit in.

But as he saw leaders like renowned scholar Cornel West preaching radical politics, he began to realize religion was “one of the most subversive things on earth.”

The past few years have been a trying time to be a socially liberal pastor. Kooperkamp has watched conservatism increasingly dominate the religious community. When conservative leaders co-opt radical language, he is outraged.

He remembers listening to the Reverend Richard Land, a Southern Baptist leader, comparing the fight against abortion to the abolitionist movement.

“To couch the anti-abortion movement in that kind of language is to knock down the liberation women have been able to achieve,” Kooperkamp said.

And in New York City, some people equate “Christian” with “fundamentalist” or even, Kooperkamp says, “crazy.”

“These people that think it’s wacko, they don’t know the half of it,” said Kooperkamp. “To have a sister or brother say ‘I’m praying for you,’ when you’re struggling – it’s an amazing gift of grace.” 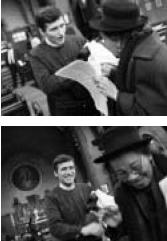