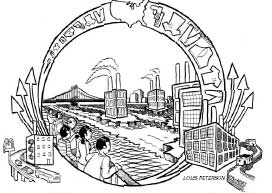 Peter Wong owns Bottoms Up 97, one of the few remaining garment factories in Chinatown. “It’s horrible, this industry, it’s going to disappear. We’ll have all the manufacturing done outside of the country and one day, nothing’s going to be made here.”
China’s emerging dominance in the textile and apparel industry is expected to increase to the dismay of both domestic manufacturers and anti-corporate-globalization activists, On Jan. 1 the Agreement of Textiles and Clothing, which placed quotas on China’s textiles at the time of China’s entrance into the World Trade Organization (WTO) in 1995, expired.
Cheap labor, cheap equipment and large profit margins make the textile and apparel industry one of the easiest industries to build from scratch – and one of the key steps in economic development in industrializing countries.
When China entered into the WTO, its government created favorable conditions for the growth of its textile and apparel industry. It kept the value of its currency low in order to spur the demand for garments at artificially cheap prices. The United States continues without success to try to persuade the
Chinese government to allow the world market to decide its currency rates.
Robert Scott, an international economist at the liberal Economic Policy Institute, said the apparel industry is nearly unsalvageable. “I’m afraid that at this point, we have few options for manufacturers of apparel. I think it’s the most vulnerable sector.”
China controls 50 percent of the textile and apparel market, compared to 16 percent four
years ago, according to the WTO. China’s exports to the United States are now five times more than U.S. exports to China.
The surge in China’s exports to the United States is severely affecting Chinatown, which was once home to more than 500 garment factories, one of the largest clusters of garment factories in the nation. Chinatown has already seen 80 percent of its factories closed or relocated and more than 10,000 of its workers displaced, according to the Garment Industry Development Corporation (GIDC).
Mrs. Lee worked in China as a seamstress until she came to New York 15 years ago. She has worked at Bottoms Up 97 for nine years. “There is less work now. My hours are less now. With the less work it has impacted my family because my income has dropped.” Many former seamstresses now work in home care or the hotel business.

LOOKING FOR THE UNION LABEL

UNITEHERE, the union that organizes and represents garment factories, has experienced a drastic decline in membership. UNITEHERE Local 23-25 had 28,000 members at its height. Today that number is 5,000.
Just as world markets are increasingly borderless, so are unions. They are looking to China to organize. “UNITEHERE supports unions around the world,” said Mark Levinson, UNITEHERE’s Director of Policy. “Manufacturing is one of the most global industries, organizing has to become global.” But Nancy Eng of the Chinese Staff Workers Association says that unions still need to focus on Chinatown precisely because of the migration of the garment industry from the neighborhood, and because some workers still endure sweatshop conditions.

“The garment workers in Chinatown are divided into two groups,” said Eng. “One group
is underemployed, while the other group is overworked” and receives low pay. UNITEHERE says they are doing everything they can to save a shrinking industry. The union and a coalition of textile and apparel manufacturers asked the government to place safeguards on 12 products. They must prove that the elimination of the quotas threatens market disruption.
The Bush administration will decide whether that threat is valid. So far, safeguards have been placed on bras, socks, knit fabrics and gowns. The administration is expected to hand down a decision on the remainder of the safeguards in February.
UNITEHERE and the GIDC are attempting to emulate China’s garment industry in Chinatown by establishing a “fashion place,” a one-stop garment design and manufacturing center under one roof in Chinatown, where a designer will be able to select fabrics and have them cut, patterned, assembled and
pressed into garments on site.
“We’re forming a network into a seamless process. We’ll work together instead of competing,”
said Kevin Chu, GIDC’s Business Developer and Chinatown liaison. “It will cut down time, which is a key issue for Chinatown.”
Chinatown’s factories have been forced to cater to niche markets for new designers and high-end clothing based on fast turnaround for re-orders and samples. Wong said he “can never compete with China’s prices, only with time. I’m still optimistic, it’s just that the pie is getting smaller and smaller.”