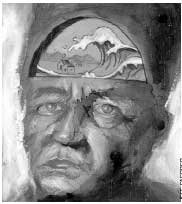 BOCHUM, Germany—German guilt over an unimaginably immense natural catastrophe emanates from the fact that many Germans (an estimated 40 percent) have vacationed in some part of the tsunami-hit region. The TV images of wiped out villages that once existed behind luxury resorts have awakened many German vacationers to the bitter poverty amid which they had blissfully sipped their margaritas while watching the tide roll in. Moreover, many Germans feel that they themselves dodged a bullet. They can empathize with the victims because they themselves have walked barefoot and bare-breasted over those very sands. There are estimated to be around 1,500 German tsunami victims, according to Foreign Minister Joshka Fischer.

Reports from numerous agencies conclude that building codes, coupled with an adequate warning system would have contained the disaster and greatly reduced the death toll. It has become clear to many here that, while luxury tourism in the tsunami region was highly developed to cater to the tourist’s every need, little attention was given to the most basic needs of the natives of those coastal regions. German President Horst Koehler responded to the tsunami by stating in a speech to the nation: “The giant waves have made it clear to us that we can not deny that we live together on one globe.”

Germans who vacation in the Maldives and other “luxury resort islands” do tend to be among the upper echelon of German society; the less wealthy get their sun in Mollaca.

It was the head of the German Protestant Church who announced how the tsunami is affecting German belief in God – that announcement, confirmed by a similar statement from the Archbishop of Canterbury, was reported both on the BBC and in the major German daily we read here in Bochum.

Some Germans of modest means did vacation in the tsunami region due to cheap vacation packages provided by travel agencies. Over the past decade, travel to the sex (is)lands has become very affordable. “One night in Bangkok” is often a vacationer’s aspiration.

Sex tourism in that region of the world has been covered in numerous German-produced documentaries, and aired on ARTE, Phoenix and other PBS-like TV channels. Single males, between the ages of 35 and 65 compose the core group of German sex tourists. German males, in turn, are one of the core groups supporting the sex tourism industry in Asia. The BBC recently ran an in-depth article about the links between sex tourism in Thailand and the sex-slave trade in Germany and Europe.

The heads of various German agencies responsible for monitoring development in the Third World recently appeared on Germany’s leading political talk show “Sabine Christiansen.” Ministers performed backflips trying to explain why the economies of those coastal regions had been so lopsided and bent out of shape by tourism. They also pointed out that German aid-workers on the ground in the tsunami-hit regions have concentrated on getting German victims triaged and sent home. One hundred medical personnel of the field hospital set up by the German army have been repeatedly interviewed and assure Germans that they’re doing all they can to help Germans.

The tsunami provides an opportunity to examine relations between wealthy Northern nations and poor Southern nations. That discussion will likely not take place. Some form of warning system will be implemented. Building codes will continue to be ignored by notoriously corrupt governments, and local economies will continue to be warped even further by the trade in tourism.

In a few years, the tsunami disaster of 2004 (and the poverty of the surrounding villages) will be far from the mind of naked Germans sunbathing on the bright beaches of the Maldives.