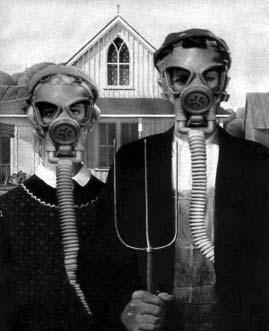 Todd Gitlin, Paul Berman and assorted intellectuals of the “decent left” have earned their keep arguing that anti-imperialism is nothing but an echo chamber of nihilism, oedipal rage and tacit support for whomever the governing class declares the enemy. Once upon a time their kind derided the Communist left as window-dressing for the gulag; now they argue that anti-imperialists are shills for “Islamo-fascist” death cults and suicide bombers. As the gate-keepers of “acceptable” dissent, they rarely take time to note what it is, this America, they’ve declared their loyalty to and what it is the “anti-Americans” oppose.

Although his book isn’t dedicated to them, Ward Churchill’s On the Justice of Roosting Chickens is a necessary intervention into not just the debates on the “new imperialism,” but the plot and themes of the United States of America on the stage of world history. Extensive and carefully documented, Churchill’s chronology catalogues America’s genocides, conquests and tragedies from the Indian Wars up through the attacks on the World Trade Center and Pentagon. He wasn’t surprised September 11 happened, just that it took so long.

Churchill’s impatience with the official delusions of eternal innocence, inherently “good intentions” and U.S. exceptionalism goes beyond scapegoating the current cabal running the show. He approaches his atrocity list of American misdeeds from Malcolm X’s basic premise: “We didn’t land on Plymouth Rock. Plymouth rock landed on us.”

What emerges, Churchill writes “is the portrait of a country which has not experienced a time when it was actually ‘at peace’ since its inception. Each and every year for the past 226 years, the U.S. military has been in action somewhere, and quite often in a lot of places simultaneously… Far from ‘fighting for freedom and democracy’ the U.S. has with equal consistency fought to repeal it anywhere and everywhere, not excluding the domestic sphere of the U.S. itself. The American public may be conveniently oblivious to these realities, but the rest of the world is not.”

Did we have the attacks of September 11 coming? Well, it depends on who “we” are.

In the shadow of the towers on Sept. 10, all the inequalities and waste of the U.S. empire were on triumphant display.

Entitled and oblivious, arrogant and thrilled that they owned the world, the ruling classes and their courtiers walked the streets at ease, drinking their Colombian coffee, sweetened with Haitian sugar, flavored with African cocoa, from cups made in China –all prepared by Mexican migrants in the back of the house. The neighborhood brothels were busy because times were good for the men with $200 for a lunchtime fuck from some recent Russian immigrant trying to buy her freedom in this, the best of all possible worlds.

Looked at from this angle, September 11 was the loudest alarm clock that ever went off. The battle between “us” and “them” isn’t the one advertised on TV.

As with his prior books, particularly Pacifism As Pathology, Churchill reserves a special spite for the self-styled progressives who acknowledge some, or even all of imperialism’s horrors in order to demonstrate the ultimate justice of the system. Undercutting his critique is the strange satisfaction he finds in the idea of “two, three, many 911s” should we not rise to his standard of effective dissent.

That might make sense if millions of Americans weren’t horrified with the path the country is on or that the most obvious beneficiary of terrorism wasn’t consistently the most reactionary elements. Some people got their karmic backlash on September 11. Some were collateral damage.

None of that matters to Churchill because he writes off not just “America,” but the “unending ranks of average Iowa farm boys who have so willingly pulled the triggers, launched the missiles and dropped the cluster bombs.”

For all his righteous anger, the tragic flaw throughout his entire history as provocateur-author is to discount the possibility that everyday people can rise above the mendacity of our rulers.

If Iowa’s farmboys are beyond hope, even Churchill’s most damning evidence is little more than justification for the cynical paralysis of passive support for terrorism. Flipping America the bird might be satisfying, but it fails to engage the matrix of conflict within America or see any positive path those taking responsibility for the crimes of empire can engage. As Arundhati Roy recently put it, “Anti-americanism is the antiimperialism of fools.”

In a sense, the Gitlins and Churchills of the world deserve each other. They agree that the only options for allegiance are between the same “us” and “them” that Bush serves up.

Rising from the charnel house of the first World War, the most successful anti-war movement in history not only pulled Russia out of the war, but brought down the Tsar that turned farmboys from Ukraine into killers. If they could do that back then, then I’m not willing to give up on Iowa (or Brooklyn) just yet.

In that same spirit, Monthly Review’s anthology Pox Americana delivers a three-pronged analysis of the current situation: informative histories of U.S. imperialism, what has and hasn’t changed with the rise of the neo-conservatives, and a half-dozen well-grounded essays on the possibility and challenges of building a popular antiimperialist movement inside the United States from some of the people who are trying to do so.

The depth and diversity of the contributors, including Roxanne Dunbar-Ortiz, Immanual Wallerstein, Barbara Epstein and Bill Fletcher, remind us that we’re not starting from zero. U.S. history isn’t just a slaughter bench, but a constant struggle. With eyes to the future, Pox Americana is ammunition for the coming war.