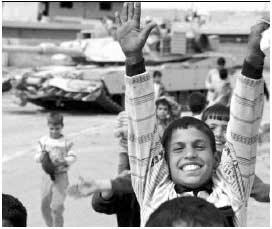 Even as the White House decries the ominous prospect of Iranian influence on the upcoming Iraqi national elections, U.S.-funded organizations with long records of manipulating foreign democracies in the direction of Washington’s interests are quietly involved in essentially every aspect of the upcoming Iraqi elections. Influential, U.S.-financed agencies describing themselves as “prodemocracy” but viewed by critics as decidedly anti-democratic have their hands all over Iraq’s transitional process, from the formation of political parties to monitoring the Jan. 30 nationwide polls and possibly conducting exit polls that could be used to evaluate the fairness of the ballot-casting.

Two such groups – the National Democratic Institute for International Affairs (NDI) and the international Republican Institute (IRI) – are part of a consortium of non-governmental organizations to which the United States has provided over $80 million for political and electoral activities in post-Saddam Iraq. Both groups publicly assert they are nonpartisan, but each has extremely close ties to its namesake American political party. NDI is headed by former Secretary of State Madeline Albright, who took over the chair from former president Jimmy Carter. Republican Senator John McCain chairs IRI.

Both groups are highly controversial and are described throughout much of the world as either helpful, meddlesome, or downright subversive, depending on who you ask. In some places their work has earned praise from independent grassroots democracy advocates, but in many Third World nations, both groups have been tied to alleged covert plans to install U.S.-favored governments.

The groups’ separate but overlapping mandates in Iraq include educating Iraqis on the democratic process, training Iraqi organizations to monitor the elections and deal with electoral conflicts, and providing impartial advice and training to political parties, according to the U.S. Agency for International Development (USAID), which is funding the consortium’s operations in Iraq.

USAID’s literature says it provides contracts and grants to private organizations that help further “America’s foreign policy interests in expanding democracy and free markets while improving the lives of citizens in the developing world.”

NDI and IRI are two of four core organizations of the National Endowment for Democracy (NED), a self-described “nonprofit, non-governmental, bipartisan, grantmaking organization” the stated purpose of which is “to help strengthen democratic institutions around the world.”

The organization and its affiliates regularly encounter allegations that they have supported opposition candidates and promoted subversive movements in countries where governments – some democratically elected – are seen as threatening to U.S. interests. A recent article in Mother Jones magazine said IRI had trained leaders involved in both the 2002 coup attempt against Venezuela’s populist president, Hugo Chavez, and the overthrow of Haitian President Jean-Bertrand Aristide last winter.

WELCOME TO THE PUPPET FACTORY

If the United Nations’ mission is to oversee the election process itself, the U.S. groups are actively engaged in cultivating political parties. IRI appears to be working most heavily with the parties and politicians favored by Washington.

“USAID has learned that ‘legitimate’ leaders are not just found, they’re made,” wrote Herbert Docena, a research associate specializing in Iraq at the Bangkok-based activist think tank Focus on the Global South. In October, Reuters obtained documents from the U.S. State Department suggesting that the parties benefiting from U.S. support of the Iraqi political process would be limited to those considered by the United States. to be “democratic or moderate,” and that the department was spending $1 million on polling to determine “which candidates and parties are attracting the most support from the Iraqi people.”

Such U.S.-backed groups, including the Islamic Dawa Party and the Supreme Council for the Islamic Revolution (SCIRI), which now dominate the 100-member National Council selected amid controversy last August, participated in a series of six “training conferences” hosted by IRI this June.

According to IRI’s website, “Topics ranged from candidate leadership skills to platform development … thus offering emerging Iraqi civic and political organizations a chance to learn a full array of successful campaign techniques.” The group has also provided instruction for Iraq’s interim governing bodies, from the original Governing Council to the present administration.

IRI’s relationship with the parties dominating Iraq’s interim government raises the question of how much influence it has had in determining the makeup of current coalitions being formed to vie for the 275-seat National Assembly come Jan. 30, which will in turn select a new government and write the country’s permanent constitution. IRI would not speak on the record about its activities. At NDI, its Democratic counterpart, Les Campbell, regional director for the Middle East and Africa, insisted that the organization does not favor any of Iraq’s numerous political parties. “We work with all the parties, including the big and well –known ones,” he said. “But we actually … spend special efforts to find, for example, Sunni parties – ones that might represent the Sunni population.”

Campbell estimated that NDI’s contributions are probably disproportionately helpful to the more obscure, less experienced Iraqi parties – the ones that need assistance at nearly every level. “We have spent special effort trying to find people and parties that might reflect the views of the urban, sort of secular intellectuals,” he said, “because we think that they are disadvantaged.” Nevertheless, he was careful to point out that NDI officially has no interest in the outcome of the Iraqi elections.

Critics of the work carried out elsewhere by NDI and IRI are concerned that the groups’ low profiles in Iraq are not driven just by security or institutional modesty. Professor William I. Robinson of the Global and International Studies Program at the University of California at Santa Barbara calls groups like NDI and IRI “extensions” of the U.S. State Department.

“I suspect that [NDI and IRI] are… trying to select individual leaders and organizations that are going to be very amenable to the U.S. transnational project for Iraq,” Robinson said. He described those actors as willing to engage in “pacifying the country militarily and legitimating the occupation and the formal electoral system.” He added that developing relationships with “economic, political and civic groups that are going to be favorable to Iraq’s integration into the global capitalist economy” would prove even more important for U.S.-based organizations in the long run.

According to Campbell, NDI and IRI first became involved in Iraq shortly after the U.S. invasion in March 2003, using NED funds while getting their feet wet. In early 2004, the U.S. government allocated $25 million to the NED to spread among its affiliate groups. Finally, in preparation for the 2005 vote, USAID gave more than $80 million to NDI, IRI and others involved in the consortium set up to provide technical and political assistance to the electoral process.

Robinson says that U.S.-based organizations will back numerous political parties in Iraq instead of just promoting one faction, but while those parties will represent different constituencies and different points on the political spectrum, they will all fall within boundaries acceptable to Washington. “What remains outside of those boundaries,” he continued, “is an alternative vision for Iraq – a completely different vision which might well be the vision a majority of Iraqis would have.”

“WE’RE DIGGING IN FOR THE LONG HAUL”

Right-wing critics have also questioned the record of the NED and its affiliate organizations. In an analysis written for the libertarian- conservative Cato Institute, Barbara Conry wrote that the NED’s “mischief overseas” has amounted to U.S. taxpayers funding “special-interest groups to harass the duly elected governments of friendly countries, interfere in foreign elections, and foster the corruption of democratic movements.” Last year, Rep. Ron Paul (R-Texas) took aim at the NED – particularly the roles of NDI and IRI – writing that the purposes for which both organizations are utilized elsewhere in the world “would be rightly illegal in the United States.”

The apparently impromptu public protest in the Ukraine following the now-rescinded win by Russia’s favored candidate, Victor Yanukovich, is believed to have been at least partly orchestrated by the NED. According to reports in the British Guardian, both NDI and IRI were involved in developing popular campaigns in support of Victor Yushchenko, the opposition candidate favored in the West whose defeat was immediately followed by condemnations of vote fraud in by both the U.S. State Department and the U.S. mass media. The Associated Press reported on Dec. 10 that the Bush administration spent $65 million over the past two years to support opposition candidates in Ukraine.
One of the mechanisms U.S.-backed groups typically use to challenge unfavorable election results is exit polls and other tracking methods, which almost invariably show Washington’s preferred candidates to have edged out their opponents. It is unclear whether IRI will engage in any exit polling or other verification methods on Jan. 30, but Campbell said NDI will not, citing “security and logistical” concerns that would render such activity impossible.

Regardless of how the Jan. 30 elections turn out, U.S.-backed nongovernmental organizations are likely to be involved in Iraq well into the future. “We’re digging in for the long haul,” said Campbell. “I would fully anticipate NDI being in Iraq five years from now or ten years from now.”
Full report available at newstandardnews.net