By Neela Ghoshal and Jeremy Kamps

GULU, Uganda—At night fierce winds batter the graying tarp of the UNICEF tent at the Noah’s Ark Children’s Center in Gulu. Fifty teenage girls huddle in stiff wool blankets on the floor, undisturbed by the 6 a.m. call to prayer from a nearby mosque, and the pounding of soldiers’ boots from calisthenics. At seven, they slowly roll from their makeshift beds, fold their blankets and trickle outside, joining hundreds of boys and girls pouring out from identical shelters. Shivering in thin dresses and T-shirts, they begin the long journeys back home to their villages. 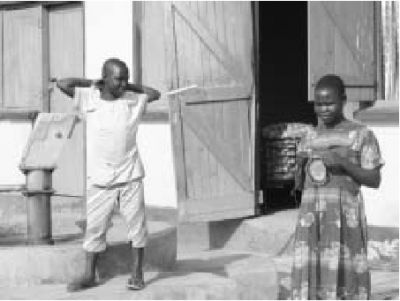 We always sleep with the light on,” explains Alice, a sturdy 16-year-old with close-cropped hair whose parents were both killed by Lord’s Resistance Army (LRA) rebels. “The children get nightmares in the dark.” This is no wonder, as children have been the primary victims in the 18-year-long civil war in northern Uganda.

The LRA thrives upon raiding villages, abducting children and forcing them into combat and service as porters and “wives” for commanders. Alice walks four kilometers from her village every evening to sleep in Gulu town, and treks back every morning.

‘WE LOOK SO GOOD TO THEM’

“They came so many times last year,” Alice says, looking out at a full moon hanging in the morning sky. “Girls our age, we look so good to them. Even a girl of 12 years they may take as their wife.”

Alice is one of the lucky ones. An estimated 20,000 children have been abducted from northern Uganda since the LRA began battling governmental Ugandan People’s Defense Forces (UPDF) in 1986 – over 10,000 of those since 2002.

Lucy Abalo, 18, recounts her story from a concrete stoop outside the home where she now works as a house girl. She was abducted in 2000 and handed over to a commander as his wife. “I totally refused,” she says vehemently. Her refusal prompted a beating, but the commander was given another girl in her stead.

Her hardships didn’t end there. Lucy was forced to steal food from villages and to participate in the abduction of 40 boys from a boarding school. After two years in the bush, she fled and found her way to safety. “We were six girls who escaped. But two died on the way.”

Ten minutes down the road, Johan Otim, 14, sits on a broken bed frame at World Vision Rehabilitation Center, recounting his abduction last April. “I had gone to bathe with my friend. Suddenly I saw strange men, rebel men. They abducted the two of us.” Johan and his friend were forced to carry baggage for a group of eight soldiers. “We would be overworked and fall down and in return we would be beaten.” A scar on Johan’s back still marks the 100 strokes he received for falling asleep in a tree while on guard duty.

The scars borne by former child soldiers are emotional as well. Brenda Achan, 13, was abducted in July 2003 by a rebel group on its way to the base of LRA leader Joseph Kony in southern Sudan. “Many people died on the way,” she remembers, eyes downcast, twisting her hands compulsively. “Those that could not walk would just be left by the roadside and die. Others died of thirst. You would have to walk over your friend like they were not even human.”

World Vision, a California-based “Christian relief” group, is one of several organizations that aim to rehabilitate former child soldiers. At World Vision, children receive individual and group counseling and “class therapy,” which eases their return to school. World Vision also emphasizes art therapy and aspects of traditional culture, such as dancing and drumming.

‘NOT THE SAME CHILD AS BEFORE’

Sometimes, counseling is provided to parents as well. “They’re visiting a new child,” says Dennis Oruk, a slender, energetic administrator. “Their daughter may have been abducted at 12 or 14, and now she’s a mother of two kids.” As he speaks, screams erupt nearby. The screams, Oruk explains, are coming from a 15-year-old mother, who recently tried to run away and abandon her baby at the center. “She doesn’t want her baby,” he says – a common feeling among the child mothers who have been raped.

World Vision’s work extends into the villages and internally displaced people’s camps. “We sensitize the community so that they really accept the children,” says Barbara Achiro, a counselor. This can be a difficult task, given that it’s not unusual for children to be forced to kill or maim family or community members as part of LRA initiation rites.

Acholi culture in northern Uganda emphasizes forgiveness through traditional ceremonies. Justin Okot, a class therapy teacher at Gulu Support for Children Organization, describes one such ritual. “The chief gathers the population nearby, and they perform a cleansing ceremony so that the people can forgive the children for what they’ve done – killing, looting. The children step on eggs, they are smeared with oil, and they drink Mato Oput” – a bitter herb whose consumption is said to remove the bitterness between former adversaries.

But Acholi cleansing ceremonies aren’t always enough. At Coopee Internally Displaced People’s Camp, 70-year-old Calito Kissa sits outside his thatched-roof hut, his 17-year-old son, Michael, at his side. Kissa, a retired teacher, has seen the stigmatization of former child soldiers in his classroom. “They are isolated and scorned,” he says.

“Some things happen in the bush that are so terrible that they fear coming home,” reflects Michael, who was abducted for six months. “They feel stupid and unaccepted, and the army is the only place they are accepted.”

Such feelings make children easy targets for the UPDF, which recruits former abductees with open arms. “So many go back to being soldiers,” Michael’s father laments.
Breaking the Cycle

Private groups provide limited support for former abductees’ school fees or vocational training, but no uniform government policy exists to ensure them alternatives, leading to a cycle of violence.

Dennis Olema is one who hopes to help break the cycle. An Acholi who graduated from Kampala’s Makerere University, he returned to northern Uganda to play his part in rebuilding a badly broken community. With the support of Project Namuwongo Zone B, a U.S.-based group of campus activists advocating for peace in Uganda, Olema is developing a program aimed at bringing together youth who have been abducted and those who have not. Through sports leagues, drama and cooperative play, he believes stigmatization can be reduced and an element of normality can be restored to the lives of former child soldiers.