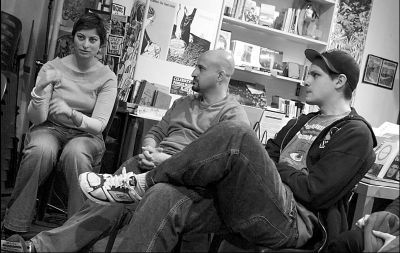 REPORT FROM THE GROUND: Afamia Kaddour, from Beirut IMC, speaks at a screening of Leaded/Unleaded at Blue Stockings. PHOTO: ANTRIM CASKEY

Kaddour, an instructor of public health practice, American University in Beirut, was here as a delegate to a meeting of the United Nations Commission on the Status of Women. The Commission was assessing the results of the 4th World Conference on Women, held in Beijing in 1995. “We don’t know what will happen tomorrow,” Kaddour said of the political atmosphere following the assassination of Rafia Hariri, former Lebanese prime minister, on Feb. 14. “The country is boiling.”

In her view, she said:

“The thing that everybody agrees upon is we want the Syrians out of our country. At the same time, we don’t want an intervention by the United States or France. “My personal feeling is that people are sick of war. We cannot afford to go through another civil war. I don’t think it will happen.” However, she said, Lebanon and its people are “very fragmented. The country has never been divided so explicitly.”

“Young people are very lost in terms of their national identity. They fight among themselves. They totally distrust the government, but are not mobilized enough.”

Politically, there are many sub-groups, factions and parties, she explained. These include the Christian right wing (Phalangists, Aounists, Lebanese Forces); the Druze, whose leader Walid Jumblatt has been the main ally of the Syrians for the past 20 years; Moslem (Shia) who support Hezbollah or the Amal party; the Syrian Nationalist party; the Communist Party; and an amorphous anti-Syrian opposition which carries Cedars of Lebanon flags in Beirut street demonstrations.

Nobody is calling for an end to the sectarian system of government under which seats in Parliament are divided evenly between Moslems and Christians, and the president is a Christian Maronite, the prime minister, a Sunni Moslem, and the speaker of parliament, a Shiite.

Economic conditions are severe, with 30 percent unemployment, Kaddour commented. “People thought that with Hariri, wealth would trickle down. This didn’t happen.”

But, she said, the Hariri government awarded scholarships to students, which in her case made it possible for her to go to American University and receive first, a Bachelor of Sciences degree, and then, a master’s in public health.

The Bush administration told Damascus to get its troops out of Lebanon. It cited U.N. Security Council Resolution 1559 of Sept. 2, 2004, which called upon “all remaining foreign forces to withdraw from Lebanon.”

Lebanese parliamentary elections are scheduled for May.