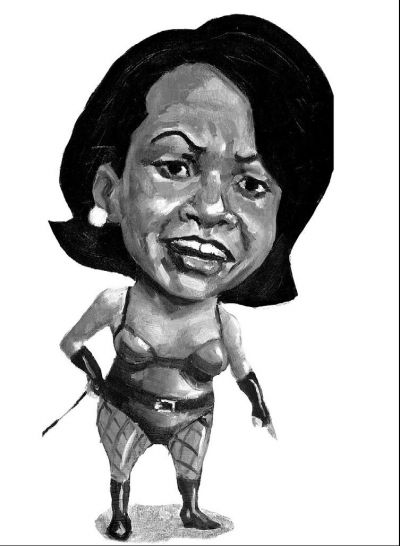 Freudian slips are fun. At a Washington dinner a few years ago, then National Security Advisor Condoleezza Rice was speaking about policy when she said, “As I was telling my husband… I mean as I was telling President Bush.” In the awkward moment, hard judgments were silently made by the table guests, judgments about her sex, her obsession with power and the loneliness it causes in her life.

The slip of the tongue was grist for the Beltway, a truth glimpsed in conversation and captured in gossip. It’s not the first time Condi’s sex life has been examined. It’s been asked, is she a lesbian or does she have a fetish for white men? Yet how can a woman with such intelligence be reduced so quickly to her body? Maybe even more important, with a world at war why speculate on her sexuality? Why do we care if Condi gets her groove back?

The obvious reason is that the black female body is hyper-sexualized. Ever since slavery it has been the site of a power struggle; from mass rape to breed new slaves, to forced sterilization to ethnically cleanse the census of unborn black citizens and now as sexual commodities in Hip Hop. Knowing this, Condi has kept up a prim and asexual image. She uses clean, antiseptic speech to challenge those who doubt her competence. Such intense control makes the audience even more curious about if she does lose it. Who sees Condi go buck wild?

Another reason could be that the fate of millions, lie in the hands of the Bush inner circle. When so much power is focused in such a small group we surround them with lights, cameras and tape recorders, hoping to hear what they are afraid to admit. If Freud was right when he wrote, “A speech blunder aims not at the betrayal of the speaker but to the enlightenment of someone outside the scene,” does that mean she was sending Bush a hopeless message of love?

In a way, Clinton was less dangerous; his sex wasn’t sublimated into a grand narrative but fed by a constant stream of women. It is when sex is sublimated into dreams of Manifest Destiny or an endless War on Terror that enemies are created simply to continue the pleasure of pursuing them. What’s dangerous is that they can be chased into every corner, through every door until cops bust down the front doors of citizens who dare vote for the internal enemy of the opposition party.

All that being said, there is a part of me, a blind race-loyal part, that wants to celebrate Condi’s rise to power. I want to explain it or excuse it or offer myself to her as the enemy, so the world will be spared her wrath. I want to give her chains and electric cables and snarling dogs and hoods and say, “Here Condi, Abu Ghraib me.”