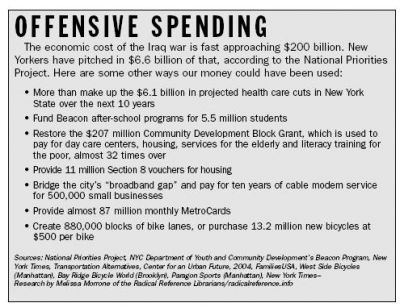 With his budget for fiscal 2006, President George W. Bush appears to be fulfilling the priorities of the American electorate by emphasizing the “defense” budget. But upon closer examination, the budget reveals a drift towards the creation of a nation dedicated to military pursuits.

News accounts proclaim the military and homeland security “fiscal winners” in the budget, but an even larger portion of tax dollars are being used for military purposes than government statistics and charts indicate.

In comparison with military spending by other countries, these sums are staggering.

Based on 2003 figures, the world spent approximately $956 billion on the military, ten times more than it spent on development assistance in 2001. Adding the cost of the military occupation of Iraq and Afghanistan to the proposed 2006 “defense” budget, the U.S. will spend $500 billion on direct military purchases.

Recall that Bush’s expected $81 billion “supplement” for the occupation of Iraq and Afghanistan was added to the military budget, which at $500 billion is, in current dollars, almost 10 percent higher than at the height of the Cold War and 15 percent higher than during the peak of the Vietnam War. Other money in the budget devoted to military spending includes the cost for Defense/Civil programs ($44.5 billion); Homeland Security ($33.3 billion); and Veterans Affairs ($68.3 billion). This pushes the total military budget to $646 billion. Add $4 billion in foreign military financing from the Department of State and the total reaches $650 billion. 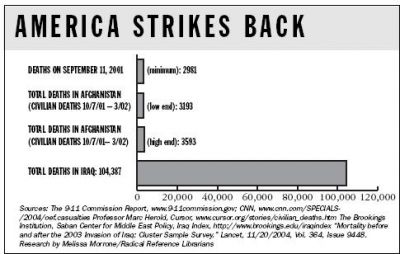 Other spending is hidden deeply in many departments such as Justice, Energy and NASA. While it will require experts to reveal these hidden funds, the cost of the bonds to pay off past military spending needs to be included in the total cost of the U.S. military. In an article in the San Francisco Chronicle, Robert Higgs calculates that debtfinanced defense spending amounts to almost $139 billion, which brings the total amount that the U.S. spends on military projects in 2006 to $789 billion.

In other words, the U.S. spends 30.7 percent of total government funding on the military, much more than the 17 percent that initial calculations disclose. This is a larger percentage than that of Health and Human Services or Social Security, and reveals the Bush Administration’s militaristic priorities.

As a larger proportion of U.S. resources goes to the military, domestic programs are being cut and the wealthy are given additional tax breaks ($26 billion more in 2006). Over the next five years, Bush plans to cut $212 billion from domestic programs, such as Medicaid, food stamps for 300,000 low-income families, and child care assistance for 300,000 children. Rather than paying for military increases with taxes, they are allowed to become part of the deficit, which will continue to run over $400 billion a year.

Military costs could go even higher. The Administration’s budget figures exclude any future costs for the occupation of Iraq and Afghanistan – already running $300 billion – or the cost of possible new military adventures against North Korea, Syria or Iran.

Such expenses do nothing to make the country safer. According to World Markets Research Center, which released the World Terrorism Index, the U.S. occupation of Afghanistan and Iraq, “has exacerbated anti-U.S. sentiment.”

Spending vast sums of money on the military will create more demand for military invasions and occupations and a spiraling need for more military funding. As Bush and the GOP shift priorities to the military, America is in grave danger of relying on the military to address its political and social problems while being seen around the world as a militaristic state and a pariah among nations. 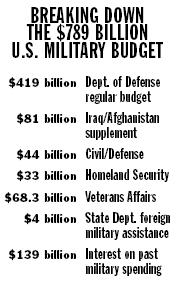