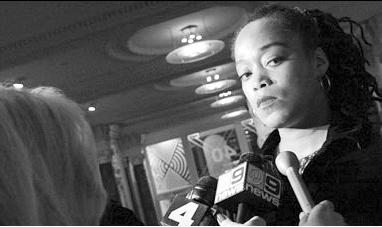 Malaak Shabazz, youngest daughter of Malcolm X, speaks to the press at the Audubon Ballroom on the 40th anniversary of her father’s assassination. PHOTO: ANTRIM CASKEY

Harlem’s historic Abyssinian Baptist Church rocked and riveted to fusion jazz and a long line of speakers marking the 40th anniversary of the assassination of Malcolm X. Organizers of the Feb. 21 commemoration also recognized community activists who received the “Spirit of Malcolm X” award. Luminaries from NAACP lawyer Percy Sutton to activist Viola Plummer reflected on Malcolm’s life and legacy, and the Welfare Poets provided a musical introduction. At times when speakers acknowledged various civil rights movement and black cultural dignitaries in the crowd, audience members would crane their necks to get a look.

After Malcolm X left Elijah Muhammad’s Nation of Islam in 1964, elements within that group began calling for Malcolm X’s death. On February 21, 1965, as he was giving a speech at the Audubon Ballroom, a man yelled, “get your hand out of my pocket,” as he struggled with another person. As Malcolm tried to calm down the crowd, gunmen opened fire, killing him.

“I heard a disturbance in the middle in front of me… then I heard [a] shot being fired. I saw Malcolm X hold his chest and felled back,” wrote Robert Edward, a member of Malcolm X’s Organization of Afro-American Unity in a police statement that day in 1965.

At the time of his death, Malcolm X was working to bring the United States government up on charges before the United Nations because of the treatment of blacks in America. Malcolm was also moving closer to other civil rights leaders and third world liberation movements.

Video of Malcolm X’s speeches at Abyssinian Church and other locations peppered the night. His speech at Abyssinian in 1963 entitled “The Black Revolution” rang particularly relevant as the Bush administration wages war in Iraq and across the globe. “No one here in this church tonight can deny that America is the mightiest government on earth today, the mightiest, the richest and the wickedest.”

Poet Sonia Sanchez brought the evening full circle, beginning her presentation with a rhythmic run down of names of civil rights leaders and then seamlessly transitioning into her speech.

“We are here not because of a few men, but a system.”