Yoko Yamaguchi, 64, from Ginowan, stages a hunger strike in front of the Defense Facilities Administration Naha Bureau to protest the planned construction of a Marine Corps air station in the waters off Okinawa.

If you think you know what it means to be a dedicated anti-militarism activist, wait until you hear about the grandmothers of Henoko.

Okinawa Island in the southern end of Japan is the reluctant host to one of the biggest concentrations of U.S. military force outside of North America. Twenty percent of the island is covered by military bases. Not content with occupying one-fifth of Okinawa’s landmass, the Pentagon now wants to build an offshore airbase in the pristine waters off Henoko. The military is claiming this is a tradeoff for the mid-1990s promise to close the massive Futenma military base, but Japanese activists have discovered planning documents for the offshore airbase dating to 1965.

Plans indicate offshore base would be built atop fragile coral reefs and sea-grass beds, destroying the habitat of several endangered species, including the gentle dugong, a sea mammal that is a close cousin to the manatee and is a symbol of peace to the Japanese people. Because of this, the Japanese government is required to conduct an environmental assessment that itself will damage the environment, including by drilling dozens of holes in the ocean floor.

The project is at a crucial stage. The first five drilling platforms were recently built offshore. That’s when the grandmothers of Henoko swung into action.

Before the drilling platforms arrived, antimilitary and pro-environment activists, some as old as 90, sat in at government offices for 10 days, occupied the beachfront for more than 250 days and held a 20-day hunger strike. When the action moved offshore, so did the opposition. The scrupulously nonviolent activists, some of whom had not previously learned to swim, became skilled rowers and divers. Former Naha City Council member Suzuyo Takazato tells of 70-year-olds in wet suits diving into the waters to disrupt the attempts to bore holes in the sea floor. At the World Social Forum in Brazil and on a subsequent visit to the U.S., Ms. Takazato displayed pictures of women and elders blocking drilling workers in rowboats and occupying the drilling platforms.

Okinawan protesters occupied a platform, preventing installation of seabed-drilling equipment. Rowing out to the platforms at 6:30 every morning, day after day, week after week, the resisters have managed to prevent all drilling to date. Workers have not yet been able to install a single drilling engine on any of the platforms.

Other avenues are also being pursued. Citizens voted against the offshore base in a referendum. The mayor, who opposed the airbase, was then called to Tokyo, and after a four-hour closed-door meeting in the prime minister’s office. He declared the people’s wishes null and void – then resigned and was replaced by a pro-base mayor. A lawsuit against the base is proceeding in U.S. federal court. (U.S. groups participating in the lawsuit were introduced to the issue by ProgressivePortal.org.) But thus far, the U.S. and Japanese governments have not budged.

The Japanese subspecies of dugong is highly endangered. Scientists believe there may be as few as 25-50 animals remaining in the wild. While dugongs have no natural enemies, they are at risk because of human activity – including the attempts to conduct the drilling survey prior to building the airbase. If the survey continues, and particularly if the base is built, they will almost surely be wiped out forever.

Activists in Okinawa and Tokyo are asking for help to prevent further base-construction activity and save the endangered creature of the Henoko coral reef. 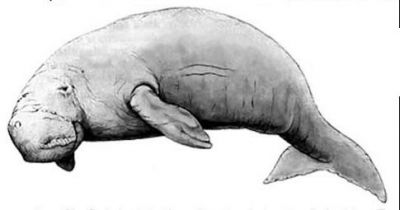