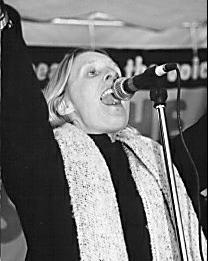 Jolie Rickman, an accomplished musician and dedicated activist in the peace and justice movements, passed away Jan. 19 after battling ovarian cancer. In her 34 years, Jolie touched an immeasurable number of people through her music and tireless work with such organizations as the Hen Foundation, SOA Watch and the Committee in Solidarity with the People of El Salvador. Jolie, who lived in Brooklyn with her partner, Bill Mazza, was raised in the outskirts of Chicago and also called Syracuse, New York home. She independently released three full-length albums and performed with such artists as Pete Seeger, Pamela Means and Ember Swift and at Ladyfest East, SOA Watch protests and Take Back the Night events across the country.

Jolie used her gifts of music and organizing to make the world a more just and loving place. She demonstrated the impact that the drive and commitment of one person can have in motivating a whole segment of people. Her music is both sweet and sarcastic and infused with a style and passion that invokes the spirit of other fearless women, such as Buffy Sainte-Marie and Emma Goldman, whom she admired. She will be remembered for her amazing talent, big heart, vibrant shows and infuriated protests. Through her strong legacy, Jolie continues to inspire us to rage for the peace and social justice that she cared for and worked so passionately toward.

A memorial service for Jolie Rickman will be held on Sunday, April 10 at 2 p.m. at the Brecht Forum, 451 West Street.