Small details of volunteers began patrolling a 20-mile stretch of the Arizona-Mexico border on April 1 against what they say the government is failing to stop: an “invasion of mobs of illegal aliens and terrorists.” The month-long gathering, dubbed the Minuteman Project, has attracted supporters, counter-protesting human rights activists, and hordes of media from all over the country. Organized primarily to bring attention to a region wrought with conflict, the project has been called patriotic by some and racist by others. 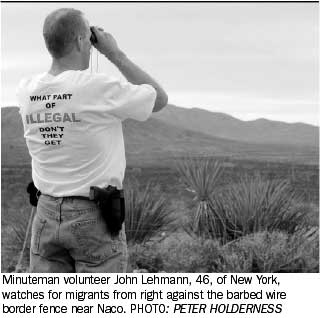 Dozens of media representatives were present throughout the weekend, often outnumbering Minuteman volunteers and protesters. Many have criticized the amount of media attention, saying that too much attention was being paid to a project that may or may not be successful. “The media has become a story in itself,” said Bisbee resident Mike Anderson. “I want the media to go home and the vigilantes to go home with their guns,” he said.

The project claims to have aided in the apprehension of 18 undocumented migrants on April 3. Volunteers called U.S. Border Patrol after sighting the group walking through a private ranch just north of the U.S.-Mexico border.

Grupo Beta, a Mexican group that helps migrants on the Mexican side of the border, was also on patrol. Founded 12 years ago, the group regularly monitors the border, giving migrants water but also encouraging them to return home. Coordinator Bertha A. de la Rosa Carrizales said they approached 30 to 40 migrants in the desert on Saturday and Sunday, alerting them to the Minuteman Project.

“The Minuteman Project is a symptom of our failed immigration policy,” Sinema, D-House District 15, said. “The project is an example that we have lost focus on a healthy border policy.”

While the project claims to have more than 1,000 volunteers, between 115 and 460 showed up during the weekend, according to various reports. Minuteman founder Chris Simcox stated that five border-monitoring sectors have been set up.

In the “Naco Sector,” nine observation posts were established, comprised of approximately four volunteers each. Two Minuteman air patrols were launched Sunday, days earlier than planned. According to the project’s website, 40 licensed pilots with 16 aircrafts have registered.

Julian Sokoloff, a Minuteman volunteer from New Mexico, believes that U.S. businesses are partly to blame for the migrant traffic and the loss of American jobs. “We need to have penalties for businesses that hire illegal immigration,” Sokoloff, a University of Oregon political science graduate, asserted. “It won’t happen because the corporations are running the country.”

The Minutemen also argue that the border should be sealed to keep terrorists from entering the country. “I feel we need to protect our borders, because we don’t need another 9/11,” said Robin Heathorn, who is on the Minuteman Project waiting list with her husband.

According to the U.S. Border Patrol, “97 to 98 percent of those apprehended are Mexican nationals” and of the remainder most are from Central or South America. For their part, human rights groups worry about the safety of migrants. Protesters held signs and banged on pots and pans, symbolizing the hungry people who travel to find a better life, outside the hall where project members registered on April 1.

“As residents of the border region, we have seen first-hand the effects of the border militarization these vigilantes are calling for,” said Lenny Molina, an Earth First! member. “Militarization accelerates the destruction of desert ecosystems and indigenous cultures and destroys the lives of people who are ultimately refugees of U.S. foreign policy towards Latin America.”

No More Deaths, a coalition of border activist and humanitarian groups, estimates that more than 3,000 migrants have died while crossing the inhospitable border area since the 1990s.

While the Minuteman Project may monitor the border for a month, the U.S. government continues to push policies like the Central American Free Trade Agreement and the Free Trade of the Americas Agreement, which will likely increase the number of economic refugees traveling through the desert seeking a better life.