On May 9, 2002, Stanley Baker, Jr., 35, incarcerated at the Ellis Unit in Livingston, Texas, wrote a thank-you note. “Dear Sir,” he began. “I would like to thank you for the books you sent me last month. I’m going to be executed May 30th, but I’d like you to know that those books will give me much pleasure in the days remaining to me. Yours truly, Stan Baker.”Cartoon musical notes decorate the stationery on which Baker wrote his thank-you note. His penmanship is neat and controlled, and at the bottom of the note, next to a large, round treble clef, someone has made a note in a different color pen: “Stan Baker was executed May 30th, 2002.”

New York City Books Through Bars, the group that Stan Baker thanked for his last books, is a local chapter of a national organization that donates books to prisoners. Its members meet twice a week at ABC No Rio, a community center on the Lower East Side.

With no formal funding, Books Through Bars relies on word-of-mouth advertising within prisons. The majority of books are donations from people’s homes. At meetings no one discusses group policies or makes goals; they just open the 300-400 letters they receive from prisoners every month and try to fulfill their requests. 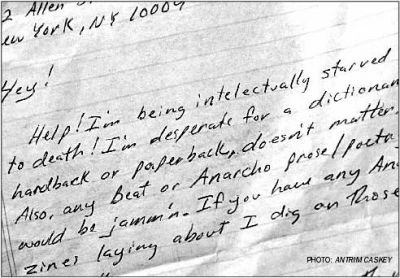 Over the nine years Books Through Bars has existed, members have noticed that prisoners in most places have begun to rely on book donations. Because of cuts in funding, prisoners sometimes wait months for library services. In New York, for example, few prisoners have regular access to books. Steve Likosky, a correctional services librarian at the New York Public Library, only has enough resources to bring a bookmobile to three prisons in Rikers Island Penal Colony each week. Every few months, he tries to change which prisons he serves. Since there are 10 prisons on the island, it can be a long, boring wait until the bookmobile comes.

“When I started this job, there was a room full of books in every jail,” said Likosky. Now there’s only one permanent library on the entire island.

It’s frustrating for anarchists to work with prisons. While Books Through Bars has barely any rules, prisons have rules about everything: how prisoners can receive mail, how people can donate books, and what kind of books they can donate.

Mostly, it’s up to individual prison administrations to decide what makes a book “dangerous.” Most prisons are afraid that donors might use books to hide drugs or razor blades for prisoners. Most prisons only accept paperback books. Hardcovers, they say, could be used as weapons. Books Through Bars gets around this rule by ripping the covers off of hardcover books before sending them.

“Part of the work here is demolishing books,” said Jessica Ross, one of the group’s core members. “Since many of us work in libraries or bookstores, it’s psychologically a hard thing to do.”

A majority of prisons screen books for content as well. Very few prisons allow pornography, and most won’t hand out books that might inspire hate crimes. (White supremacist literature, for example, is not usually allowed.) But censorship always raises unanswerable questions. Each prison defines pornography differently. Ross said prisons in Texas, for example, tend to bristle at William S. Burroughs.

Books Through Bars has an internal screening system, too. Their website says they won’t accept donations of “religious books, legal books (except legal dictionaries), old magazines (besides National Geographic), hate literature, encyclopedias, mass market fiction (such as Danielle Steele and Stephen King),” but Ross said some members send these items anyway. Usually, individual members decide whether they want to fulfill a particular request. As a rule, though, they won’t send business or real estate books.

“We’re trying to send things that would challenge the status quo,” said Vikki Law, one of the founding members of the group. “It’s sort of a pipe dream that you can get out and make a billion in real estate or whatever, and we like to challenge that.”

Books Through Bars saved Stan Baker’s letter in their binder along with dozens of other letters from prisoners. The binder has the feel of a lovingly crafted photo album. One section has drawings: a knight on a horse breaking through a brick wall, Popeye, a skull and crossbones, a weeping Native American, and many, many big cats with gleaming teeth and exquisitely detailed claws. One man sent a handmade crucifix hanging on a length of twine. You get the feeling that maybe prison is sometimes not how you thought it was. There are prisoners in their cells, drawing and writing letters. And men on death row are reading straight through their last weeks of life.