The world is waiting for Americans to show visible resistance and dispel the illusion from the November election that most of us actually support the Bush administration’s bloody empire. With notable exceptions, the visible, noisy, confrontational, and disruptive signs of resistance are MIA. Where did all of us anti-warriors go?

“It dawned on me after the election that people are tired of unfocused protests and calls to action with no strategy or concrete goals to work for,” says Mike Kress, an Air Force veteran who left as a conscientious objector more than a decade ago and now works with the Spokane Peace and Justice Action League. How do we develop a strategy that can stop the war and occupation of Iraq?

People power recognizes there is a fragile relationship between those in power and the rest of us. Our compliance forms the pillars on which their power depends. When we withhold our cooperation and organize determined campaigns to assert our power, we can force changes or even remove those who refuse to make them. Three key pillars of the Iraq war and occupation are troops, corporate profiteers, and corporate media disinformation. A people power antiwar strategy means organizing campaigns around these pillars and consciously adopting a big-picture framework. 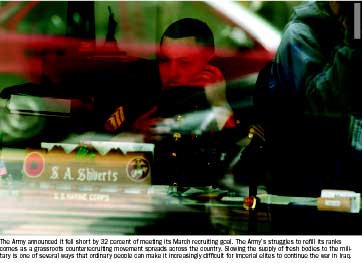 “If the peace movement organizes and pursues a specific strategy to reduce the recruitment and retention of men and women available for military service, the sustainability of the occupation will reach a tipping point,” says Kress. “Students and peace groups across the country are discussing and planning what to do in the event of a draft. In Spokane we are currently planning our strategy as a two-prong campaign, one aimed at recruitable/draftable youth, the other at current military members.”

Forcing corporations to withdraw their participation would shut down essential components of the war and occupation. Houston Global Awareness (www.houstonglobalawareness.org) is waging a campaign to get Halliburton out of Iraq and out of profiteering from the occupation, as part of the people power strategy. “Halliburton’s operations are essential to the continuing U.S. presence in Iraq and forcing their withdrawal would shut down parts and motives of the U.S. occupation,” says their call for a May 18 nonviolent direct action at Halliburton headquarters in Houston during the company’s annual shareholder meeting.

As for the media, “this is an information war,” said reporter Dahr Jamail (dahrjamailiraq.com) in a recent interview. “Working as an independent journalist in Iraq, I have seen the disinformation from the selling of the war to the public, the invasion and occupation up to the siege of Falluja and the Iraqi elections. If independent media can do their job and tell the story, tell the truth and have photos, proof and eyewitness interviews, and activists are more successful at bringing in more listeners and readers, that will be a better path to ending the occupation than continuing to react to the disinformation and the lies put out by the corporate media and the Bush administration.”

To stop the next war, be it in Iran, North Korea, Syria, Venezuela or elsewhere, and to counter the domestic impact of empire, it is essential that we frame our campaigns within their systemic context. In this way our efforts to stop the Iraq war will build momentum towards stopping other wars and injustices and help us to collaborate with those resisting attacks on Social Security, other critical social programs and basic civil liberties, and immigrant and workers’ rights. We can also articulate positive alternatives. For example, if we are opposing oil companies like Chevron Texaco, we can simultaneously advocate alternative fuel/transportation systems and democratic non-corporate institutions to take their place.

We can also learn from the significant recent victory the Coalition of Immokalee Workers (ciw-online.org), winning the demands of their three-year-old Taco Bell boycott on March 8. The Florida farm workers won major increases in wages and forced growers to recognize their organization by asserting “people power” and by organizing as a campaign with achievable milestone goals along the way. This meant building consciousness in their community; creating alliances with students, religious groups, poor people’s and immigrant organizations, and global-justice activists; and taking action, from local general strikes to students forcing out 22 campus Taco Bells, a major buyer of the tomatoes they pick.

A final key ingredient in a successful strategy is our ability to frame our own struggles and win the “battle of the story.” I look at the conflict between grassroots social movements and empire as a battle of mega-stories that seek to redefine reality. We told the story of the Seattle shutdown; grassroots movements from around the world could confront and check the power and wealth of the World Trade Organization. After Sept. 11, 2001, they told the “War on Terror” story. We told Feb. 15, 2003, millions of people on every continent challenging the U.S. empire’s impending invasion of Iraq. Then they told the story of Nov. 2, 2004; the Bush administration fabricated the illusion that most Americans supported its policies of empire and right-wing fundamentalism.

David Solnit is the editor of Globalize Liberation: How to Uproot the System and Build a Better World. For more about the People Power Strategy Project, see GlobalJusticeEcologyProject.org/peoplepower